stakeholders in the maritime industry have blamed the contractors handling the construction of the access road to Tin Can port from Mile 2 for the debilitating traffic caused by the heavy presence of articulated vehicles along that route. 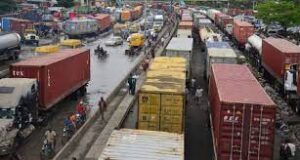 Recall that the Federal Controller of Works, Lagos, Engr. Popoola Olukoyade had earlier told Shipping Position Daily that it took about six months before the Taskforce Team and Military could evacuate all the haphazardly parked trucks on the road and get the contractors to commence work at the Mile 2 -Tin Can Island access road.

According to him, the contract has been awarded since November 2018, but he promised that the construction along the Tin Can Island Port access road will soon be completed.

During a surveillance tour of the Mile 2- Tin-Can Island Port access road by one of our correspondents last week, it was observed that some sections of the road have been completed for vehicular movement. However, the heavy presence of tankers and trucks on both sides of the road has made the road inaccessible and not motorable for drivers, thereby inhibiting their access into the port.

While speaking exclusively with a licensed customs agent, Mr. Pius Ujubuonu, he told Shipping Position Daily that the Mile 2 Tin-Can road is currently not accessible to drivers as many stakeholders and clients are forced to patronize “Okada” riders before they can access the ports.

“The Mile 2 – Tin Can Island port road is currently not accessible. In fact, the attitude of the contractors looks like an anti-economic behavior. We had expected that one part of the road would have been completely linked with Cele bus stop before the other part, but they just took the two sides of the road to Sunrise and left it there. The Mile 2 link is left the way it is. It has not solved any problem. It is still a colossal economic waste looking at the amount of time drivers spent there. They just left the road from Tin Can First gate to Sun Rise the way it is. Once you get to Sun Rise, getting to Mile 2 is another nightmare Many of the port users still use Okada because the road is not accessible to and fro. I think it is more of an approach defect” Ujubuonu said.

While reacting to the gridlock caused by tankers and trucks, Ujubuonu said the trucks and tankers most especially, should not be blamed because there are no facilities to take them away from the roads.

In his words: “If the tankers blocked the roads, they are not completely wrong but the reason I would not subscribe to that is that, if one side of the road has been linked and it becomes accessible, it can be used as a service lane and provide access to those going and coming back from Mile 2. After all, there is a place that was opened in front of Grimaldi Car Mart where vehicles can go to the other lane. It would have been very useful that the traffic movement would have been better and faster so that even commercial vehicles can access Mile 2 and load.

“We know that naturally, the port and tank farms have created a lot of pressure on the road. We should not continue talking about that. If the tankers cannot stay there, where else can they be? They don’t have a waiting place to call up. I am not justifying their staying there but part of the problem we have are the two superstructures that we have there, the port and the tank farms. Definitely, their subscribers should have a place to access their facilities. So it is not entirely the fault of the tankers” Ujubuonu said.

On his part, the Deputy National President of the National Association of Government Approved Freight Forwarders (NAGAFF), Mr. Simeon Nwonu lamented that the contractors should have completed the construction, even as he noted that the inaccessibility of that road to the Tin Can Island port from Mile 2 has greatly affected the business of freight forwarders as they constantly lose their clients and money through the cost of paying demurrage.

“I don’t know the kind of country we are. The Mile 2- Tin Can access road is a four-lane dual carriage road. The contractors have just managed to make a two-lane carriage at one side of the road accessible. Occasionally, they mount heavy blocks to block the road making it impossible for those two lanes to be used. The implication is that we will have a backlog of trucks that will remain immobile on the same spot for days. If Nigeria is a country where we show patriotism, the contractors by now are supposed to have completed that road. It is as if they derive pleasure from seeing people suffering. However, it may be possible that the government that gave them the contract has not even paid them the money they need to complete the job. A lot of issues are involved and the suffering is too much.

“Many Freight forwarders have lost their clients and their money. This is because a lot of money is required. When you go to the shipping company and make deposits, by the time these containers leave the terminals and get to the warehouse it takes days. The longer the days, the higher your charges. It is a big problem. There is a total systemic failure in all port operations which of course is a reflection of the larger Nigerian society.

Also, Mr. Wole Obe, a freight forwarder and member of ANLCA operating at the Ports and Terminal Multiservice Ltd (PTML) said the Mile 2 – Tin Can access road is a no-go area. “They are yet to fix it. It is not motorable for now. It is only accessible by the Okada riders. The road is not yet completed to any extent. If you cannot link the road to the port, how is it completed? he asked.