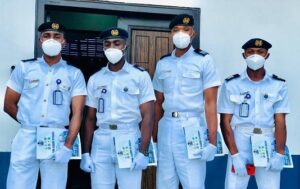 The suggestion followed the recent giant strides and achievements of the Maritime Academy of Nigeria (MAN), Oron, particularly in infrastructure under the leadership of the Rector, Commodore Duja Effedua.

While speaking in an exclusive interview recently, a seasoned seafarer and stakeholder in the industry, Captain Deji Abegunde told Shipping Position Daily that MAN Oron has been performing brilliantly. This is even as he suggested that the Nigeria Maritime Administration and Safety Agency (NIMASA) should look into enforcing a compulsory one-year short programme with MAN Oron for all non-MAN cadets.

In his words: “We are supposed to have multiple centres like that of MAN Oron. Oron is the only one monopolizing these resources. The products of MAN Oron are okay and can compete anywhere in the world. If NIMASA can organize a compulsory one-year short programme with MAN Oron before you can get a limited certificate because that is what they put before IMO.

“Looking at the standards of MAN Oron, whoever graduates from other nautical schools should go to MAN Oron for another one year course before they can get a limited Certificate. If it starts from that, other nautical institutions will strive to come to the level of Oron. So we will have more standard nautical schools and produce qualified Nigerian seafarers that can spread all over the world and can earn dollars and foreign currencies”.

Abegunde however charged the Federal Government to build other nautical colleges and adequately equip them in other to increase the chances of producing more qualified and internationally relevant cadets and seafarers in the country.

But, the President of Nigerian Association of Master Mariners; Captain Tajudeen Alao opined that he is not in support of the one year programme, even as he stated that the most important criterion is to meet the model courses and requirements of the International Maritime Organization (IMO).

He said any institution that is approved by the National Board of Technical Education and accredited by NIMASA is acceptable and good to go.

“There are many entries to CoC training. What is most important is to meet IMO model courses requirements, have adequate sea time and theory classes in school. Any school approved by the National Board of Technical Education and accredited by NIMASA is good to go and acceptable” Alao said.