Some stakeholders in Badagry on Thursday lauded the Federal Government’s approval of $2.59 billion for the development of the Badagry Deep Seaport project under Private Public Partnership. 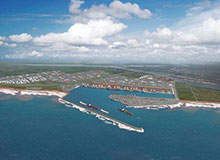 They told the News Agency of Nigeria (NAN) in Badagry that the move was a good development in the socioeconomic development of the town and the country, at large.

NAN reports that the Federal Government, on Wednesday, approved the sum of $2.59 billion for the development of the Badagry Deep Seaport project under a Private Public Partnership.

The Minister of Transportation, Mr Mu’azu Sambo, disclosed this to the State House Correspondents after the Federal Executive Council meeting chaired by President Muhammadu Buhari at the Council Chambers of the Presidential Villa, Abuja.

Sambo explained that, under a Build-Own-Operate-Transfer delivery system, the port would be operated by the private sector for 45 years after which it would be reverted to the government.

He noted that the project would generate $53.6 billion in revenue and create about 250,000 jobs; while making Nigeria a maritime hub in West Africa.

Sodipo added that it would bring the long expected development in Badagry and it’s environs.

“However, the approval is not enough, but the project must be seen to be implemented and not abandoned,” he said.

Similarly, Mr Tunde Hunpatin, the Secretary, Coconut farmer Association, Badagry, said that it was a good news for the good people of Badagry.

“We received the news with joy and happiness, after staying this far to hear such soul soothing information.

“In actual fact, the announcement is long overdue as this will sustain the confidence and the belief of the masses and the reality of the project .

“The approval granted by the Federal Executive Council is a confirmation that the project shall see the light of the day,” he said.

To Mr Kamarudeen Ajape, the former Secretary, Badagry Local Government, the project would be the greatest catalyst that would propel high economic activities which would aid the overall growth and development of Badagry, Lagos State and the country at large.

Also, Mr Podo Sunday, a maritime expert, said he hoped the approval would supersede previous periodic approvals where nothing happens.

“The project has dragged on for too long and people were already getting apprehensive of a possible policy somersault on the part of government.

“But the announcement by Federal Government on Wednesday, is like hope rekindled for both residents of Badagry and the maritime sector of Nigeria.

“The era of port congestion at the Apapa and Tin Can Island Ports will become a thing of the past.

“The socio-economic growth and transformation of Badagry is dawned and we hope the project do not suffer further delay,” he said.

Also speaking, Mr Edomi Ovie, a journalist and former Publicity Secretary, Association of Communication Scholars and Professionals of Nigeria, said the approval was in the right direction.

“Firstly, the Badagry Deep Seaport project will be executed under a Public Private Partnership (PPP) scheme, meaning the private sector will inject money into the port and manage it for 45 years.

“Secondly, it will help to reduce the use of neighbouring countries seaports by importers and clearing agents.

“Also, the Badagry seaport will make Badagry, the ancient town known for tourism, to become an economic hub in Lagos and that by itself will create a lot of job opportunities.

“The project will enable commercial activities along the coastline to receive a boost and the impact of such efforts on the economy and the citizenry are always enormous,” he said.

Similarly, Mr Felix Godonu, the President, Hengo Badagry Association, said all stakeholders were happy because the project would set Badagry on the part of development.

“The project promoters should ensure that stakeholders are carried a long in the areas of compensation, employment, empowerment, security, environmental protection, provision of social infrastructure.

“Our expectation now is to see the promoters of Badagry Deep Seaport swing into action by ensuring proper compensation and relocation of affected people as promised by the promoters then other steps of development the project can follow,” Godonu said.