Stakeholders in the nation’s maritime industry and road users who ply the Mile 2 to Tin Can port access road have raised alarm over the alarming rate of highway robbery that takes place on that part of the Apapa-Oshodi expressway daily. 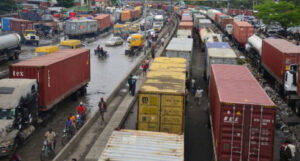 The stakeholders and road users who in a chat with our correspondent lamented that the robbers take advantage of the traffic gridlock around the Apapa Oshodi expressway to attack and rob port users, commuters and other motorists plying the route.

Recounting his ordeal, a clearing agent and the National Coordinator of Save Nigeria Freight Forwarders Imports and Export Coalition (SNFFIEC); Chief Osita Chukwu told our correspondent how he was robbed and his vehicle destroyed recently at the Mile 2 area on the port access road.

Chukwu said that the sum of N250, 000 was taken away from him and his smart phone also stolen while in traffic on his way home. He informed that his car was also destroyed in the process while calling on the Lagos state government to deploy the Police to the area.

According to him, “the Mile 2- port access road has now become a deadly area in Lagos, where robbery takes place anytime of the day. While coming from Apapa last month, I was robbed in traffic at the area, my N250,000 that I had with me was taken, my phone was stolen and even my car widescreen was destroyed and this is not the first time robbery is taking place in that area, freight forwarders are now afraid to take the route, because you never can tell what will happen to you.

“During Fashola’s time as governor, the police were stationed at almost every spot in that area, but it’s not so now, I think the state government needs to ensure they bring the police back to this area to protect lives and properties of the citizens, because it is already getting out of hand” he said.

Also speaking to our correspondent, an Okada rider, who simply gave his name as Yussuf said robbery at the area has become a daily occurrence, stating that many Okada riders have been victims of the dreaded highway robbers. He informed our correspondent that not less than 20 bikes have been stolen since the beginning of the year.

He said the constant robbery made some of the Okada riders to resort to jungle justice once the robbers are caught.

According to him, no fewer than six robbers have been burnt alive since the beginning of the year as a deterrent to others.

The Vice President of the Association of Nigeria Licensed Customs Agents (ANLCA), Dr, Kayode Farinto had also of recently lamented that customs agents are being robbed on a daily basis in the area.

Also lamenting to our correspondent, a taxi (Uber) driver, Esuola Azeez, informed our correspondent that last week, while approaching Apapa from the Mile 2 to drop a passenger, one of the robbers approached him to wind down his window glass or he would break it, he said after winding down out of fear of his car being damage, the robbers numbering about four told him to give them all that he had with him.

He said after giving them the N7,550, that was with him, they threatened to break his windscreen and runaway if his passenger did not also part away with his money.

He lamented that the passenger also had to part away with the sum of N6000, even as he added that despite collecting the money, the robbers broke his side mirror and ran away.

Another road user who spoke to our correspondent informed that some of the robbers who are mostly well dressed will sometimes board the same bus with passengers coming from the Cele bus stop to Mile 2 where rob unsuspecting passengers.

He informed that apart from the various wounds on their faces, it will be difficult to identify them as robbers, because of the way they are dressed.