The Director-General of the Nigerian Centre for Disease Control, Dr. Ifedayo Adetifa has urged Nigerians to avoid bush meat as a way to curb the spread of the monkey pox. 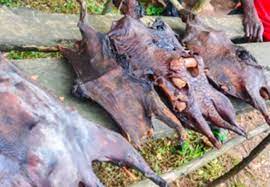 He said, “I think it is important that we be careful – I’d prefer to shun – but also careful in handling all bush meat.

“The greatest risk to health security as you know is going to be zoonotic diseases and zoonotic illnesses are like Sars-Cov-2 like pathogens that primarily affect animals but acquire the capability to humans and what happens thereafter is if they change once they infect the first humans, they become more effective in person-to-person transmission. So we should be careful.”

He, however, said while there have been cases of monkeypox reported, no death has been recorded from the disease.

“The first thing to say is there’s no outbreak of monkeypox.

“The term outbreak is being used wrongly, yes we are having cases of monkeypox just like we have continued to have had monkeypox cases since it re-emerged in 2017.

“Since 2017 till date, we have had about 558 monkeypox cases with about 8 deaths. This year alone we have 46 suspected cases reported and about eight cases confirmed with no death.

“We know there are a few suspected cases reported from here and there and we are waiting for lab results from the national reference lab.

“So, the occurrence of sporadic cases of monkeypox is not surprising and does not constitute an outbreak.

“But yes, we are worried about monkeypox, and as you know its closest relation is the smallpox virus.

“We are worried that it potentially can change from something being sporadic, or something that is not very good at person-to-person transmission to something that can give us a cause for concern which is why we continue to keep an eye on it,” he said.

Meanwhile, the World Health Organisation has also warned that Nigeria is at risk of ongoing transmission of monkeypox.

This is coming after the UK had detected monkeypox from a Nigerian traveller. According to the UN body, the individual is a UK resident who arrived in Nigeria on April 20, travelled to Lagos and Delta States during the time spent in Nigeria, departed Lagos on May 3, and arrived in the UK on May 4.

According to the US Centre for Disease Control and Prevention, Monkeypox is a rare disease that is caused by infection with the monkeypox virus.

Monkeypox is a virus that is spread primarily from animals to humans. The accompanying symptoms could be fever, headache, body pain, malaise, enlargement of glands (lymphadenopathy), sore throat, and fluid-filled body rashes (vesicular rash). This may last for two to four weeks.

The CDC also said Monkeypox was first discovered in 1958 when two outbreaks of a pox-like disease occurred in colonies of monkeys kept for research, hence the name ‘monkeypox.’

The first human case of monkeypox was recorded in 1970 in the Democratic Republic of Congo during a period of intensified effort to eliminate smallpox. Since then, monkeypox has been reported in humans in other central and western African countries.