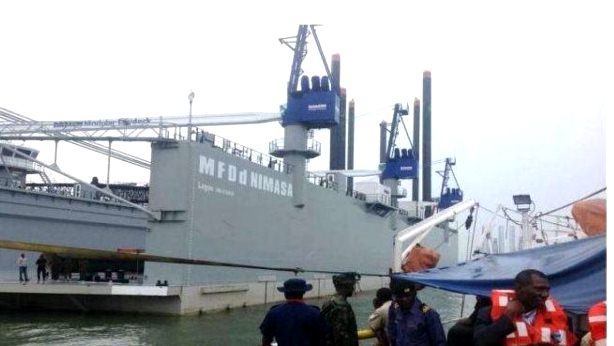 The recent threat by an unknown group to lead a massive protest to shut down the head office of the Nigerian Maritime Administration and Safety Agency (NIMASA) in Lagos, over refusal to relocate the modular floating dock to the Niger Delta, has once again woken-up many to the unresolved issue of the floating dock.

The multi-million-dollar modular dock that was acquired by NIMASA and which arrived in Lagos, Nigeria since June 11, 2018 has been idle since.

Following the long delay, the controversy over its actual place of engagement and coupled with the silence on the part of NIMASA, the body which called itself the ‘Save Niger Delta Group’ threatened to shut down NIMASA.

It argued that the floating dockyard acquired at a cost of N50billion, was proposed for Okerenkoko in Delta State, owing to the presence of the Nigerian Maritime University. It also said that it was regrettable that the facility has remained idle since it arrived the country.

Curiously, a few days after the notice of protest became public, the NIMASA issued a statement in which it disclosed that the Infrastructure Concession Regulatory Commission (ICRC) had issued a Certificate of Compliance for an Outline Business Case (OBC) for the operation of the controversial Modular Floating Dockyard on a PPP basis.

In the statement, NIMASA tactically reaffirmed its commitment to a Memorandum of Understanding with the Nigerian Ports Authourity (NPA), which is willing to offer its facilities in Apapa as the final place of engagement for the floating dock. The NPA has the Continental Shipyard in Apapa, which can effectively berth the floating dry dock.

Available statistics indicate that, about 5,000 ships call at the Nigerian ports annually, there are about 400 coastal vessels and many fishing trawlers. These make the business of dry docking potentially lucrative, because there is an existing and sufficient demand.

Experts have put what Nigeria loses to be in excess of $100Million, when such vessels are moved outside her shores for the statutory dry docking.

Experts say that, to ensure that a ship is seaworthy, it must be dry-docked twice in at least five years. Some ships may have dry docking postponed or the intermediate dry docking waived by performing an underwater Inspection in lieu of dry docking. All these costs huge revenue.

In an apparent bid to put an end to the huge cost of dry docking outside the country, NIMASA in 2014 commissioned the construction of the floating dock.

The projection was that the agency will save the Federal Government about $100 million annually and about $1 billion in 10 years.

Sadly, there has been a lot of back and forth since the craft came in to the country in 2018.

Unlike the normal practice when such would be celebrated, the floating dock’s arrival in June 2018 was kept under wraps, it was only later disclosed through a terse statement from NIMASA.

And since then, the expensive craft has suffered diverse treatment; the worse being that NIMASA treats it like an unwanted child, unsure of what to do with it and where to locate it.

How does any agency of government justify the fate that has befallen the floating dock in that manner?

We are of the opinion that NIMASA did not subject the acquisition of the floating dock to due diligence. If it did, the inaction or helplessness exhibited upon its arrival wouldn’t have been.

NIMASA has enough time since 2018 when the floating dock arrived, enough time to determine its fate, rather it has been dilly-dallying over what to do. As it is now, the facility is not generating any revenue.

Did NIMASA not know that, it is a regulator and not an operator, hence operating that dock is not an option. The only viable option is to concession the floating dock to earn money.

There are organisations that will eagerly take up the responsibility of putting the craft to use. The sooner this is done. Each day the floating dock stays idle, it gulps money, depreciates and rots way.

However, we are happy that there are moves as demonstrated by the MoU with the NPA to hand it over to a private concern to operate.

It is our sincere hope that the NIMASA DG will abide by the assurance given while receiving the Certificate of Compliance from the ICRC.

The industry will hold Dr Jamoh by his words was that he would see to the careful deployment of the dry dock in line with relevant regulatory instruments to ensure wealth creation, job creation, and revenue generation for the Federal Government.