Home » Sudan Gets UAE Backing for a New $6 Billion Seaport

Sudan Gets UAE Backing for a New $6 Billion Seaport

The government of Sudan has signed a $6 billion agreement with a consortium from the UAE to build a new port on the Red Sea. 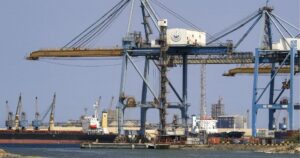 The site is about 125 miles to the north of the country’s sole seaport, Port Sudan. There are several protected inlets in the area for possible harbor development. The region is directly across the Red Sea from Jeddah, Saudi Arabia, which is a hub for shipping in and out of Sudan.

The location is bordered by vast tracts of desert, and Port Sudan is itself the nearest population center of any size. However, the developers plan to build a new 280-mile-long road to connect up to Abu Hamad, a farming hub on the Nile River.

On Tuesday, Sudanese Finance Minister Gibreel Ibrahim announced that this remote site would be home to a special economic zone, an airport, a power station and a new road network. Under a preliminary agreement, Emirati government-owned Abu Dhabi Ports Group and Sudan’s Invictus Investment will take up construction and management of the new seaport.

Over the past year, Port Sudan has suffered from disruption related to the country’s complex political problems. A regional tribal council shut down road connections to and from the port in September 2021 in order to support a military coup, and civil unrest has continued to disrupt port movements this year. The opening of a new, alternative seaport could provide a new outlet for cargo.

The port deal’s announcement comes about one week after the signing of a U.S.-brokered power sharing framework between Sudan’s ruling military junta and a patchwork of civil society groups and tribal leaders. The agreement still needs buy-in from multiple factions, and more talks are expected.