Indonesia has increased the number of aircraft and vessels to search and rescue the victims of a capsized ship in the central parts of the country, a rescuer said. 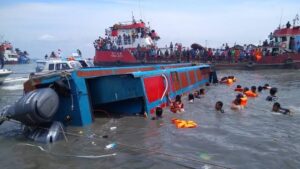 Another helicopter was deployed to the scene in the Makassar Strait on Tuesday, bringing the total to two in the operation, and another ship would also help the mission on Wednesday, Isran A, a rescuer at the information center of the search and rescue office in South Sulawesi province, said.

“The search focuses on the northeast of the spot where the ship capsized with more helicopters and personnel.

“And, according to a plan, another ship will also help the mission on June,“ he told Xinhua via phone.

Isran said the number of missing victims rose to 19 on Tuesday from 11 a day earlier, as the head of the village has reported some missing villagers to the provincial search and rescue office after the incident.

As many as 31 people had been rescued safely from the boat incident, according to him.

Rescuers have extended the search area to 40 nautical miles to the northeast of the location where the ship capsized, Mukti Ali, a rescuer at the search and rescue office, told Xinhua.

The ship sank after being hit by huge waves in the Makassar Strait on Thursday, but rescuers got the information about the incident on Saturday, according to Wahid D.J., a senior official at the search and rescue office.

The ship suffered from an engine failure when it was hit by the huge waves, he told Xinhua.