Home » Tanker Crew Accused of Stealing $1.2M Worth of Diesel From Their Ship

Tanker Crew Accused of Stealing $1.2M Worth of Diesel From Their Ship

Fuel theft is a classic form of maritime piracy, and it was common in Southeast Asia and the Gulf of Guinea for many years – but rarely did it involve the active participation of the entire crew. The Malaysian Maritime Enforcement Agency says it is investigating a rare case in which 12 crewmembers are accused of stealing 475,000 gallons of diesel from their own vessel. 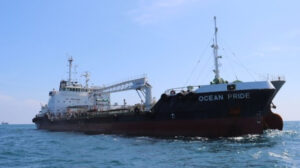 In early October, the product tanker Ocean Pride was operating off the coast of Tanjung Siang, Johor, on a voyage from Singapore to East Timor. At about 1300 hours on October 5, the MMEA received word that the tanker had been robbed about 24 nm off the coast, near the eastern entrance to the Strait of Singapore.

On arrival at the scene, the MMEA’s officers found that the vessel had been abandoned. An inspection revealed that the ship was missing about 475,000 gallons of diesel fuel, with an estimated value of about $1.2 million. The 12 members of the crew stand accused of siphoning off the fuel, then abandoning the vessel and fleeing.

In addition to releasing its own wanted notice, the MMEA has enlisted the help of Interpol. It has distributed an international Red Notice requesting other nations to assist in the arrest and extradition of the suspects.