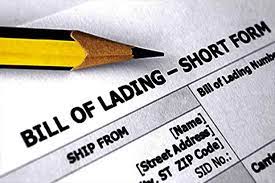 Although the contract of carriage will generally be made before the goods are sent to the ship, the contract may afterwards be reduced into writing and expressed in the bill of lading.

Apart from bills of lading goods can also be shipped by other contracts, e.g. contracts of afreightment or charter parties.

The legislation governing carriage of goods at sea sometimes depend on the types of contracts that are used in the carriage.

Where the seller of the goods sell in large quantities, it may charter the whole or part of the ship. The charter of a ship is the hire of the ship for the use of the charterer.

The three main types of charters are:

Under a bareboat / demise charter the vessel is chartered in ‘bare’ form for the use of the charterer for a period of time. The charterer is obliged to supply whatever is needed for the operations of the vessel including the crew.

Read Also:  QUESTION OF THE WEEK: What Is The Difference Between Demurrage And Detention

Some common forms of charter include ASBATANKVOY, EXXON MOBIL Voy, SHELLVOY. The vessel owner is keen for the voyages to be completed as soon as possible to free the vessel for further deployment / additional charter. As such the voyage charter will often have fixed laytime and demurrage provisions to provide a financial incentive to the charterer to complete loading and discharging as soon as possible.

Demurrage disputes are the most common form of disputes in voyage charters. Further the vessel owner will often shift the risks of delay under the charter provisions to the charterer. Under a voyage charterparty the remuneration payable by the voyage charterer (similarly by the shipper or consignee under a bill of lading) for the carriage of goods by sea is called ‘freight’.

Parties can negotiate directly especially if previously dealt with each other. Often the vessels are sourced by shipbrokers and the shipbrokers act as intermediary the negotiations and finalisation of the charterparty terms.

Often the charter terms refer to the standard or industry forms. Even if the forms are commonly used, it is important to do the following:

Understand the terms.
Realize the fixture or recap concludes the contract – the signed detailed charterparty is the formality.
Sailing of or deployment of the vessel is already the performance of the charter.
Standard forms are adapted to transaction by use of rider clauses.
As a general rule: rider clauses will override the standard form wordings where inconsistent.
Certain terms will be implied into the charter where necessary to give business efficacy to the contract as what the parties must have intended or to impose implied obligations of the vessel owner eg. that the vessel must be seaworthy.
Apart from the contractual relationship and the express and implied contractual duties, there are also obligations and responsibilities imposed by law eg. Duties under bailment, lien, maritime law e.g. general average, salvage.

A bailment, traditionally defined, is a delivery of personal chattels on trust, usually on a contract, express or implied, that the trust shall be duly executed, and the chattels redelivered in either their original or an altered form, as soon as the time or use for, or condition on, which they were bailed shall have elapsed or been performed. Under modern law, a bailment arises whenever one person (the bailee) is voluntarily in possession of goods belonging to another person (the bailor). The legal relationship of bailor and bailee can exist independently of any contract, and is created by the voluntary taking into custody of goods which are the property of another, as in cases of sub-bailment or of bailment by finding. The element common to all types of bailment is the imposition of an obligation, because the taking of possession in the circumstances involves an assumption of responsibility for the safe keeping of the goods. An action against a bailee can be regarded as an action on its own, sui generis, arising out of the possession had by the bailee of the goods.

QUESTION OF THE WEEK: What is block stowage?

COVID-19: How To Get And Keep A Good Crew