Recently, the Association of Maritime Truck Owners (AMATO) cried out that extortion by officials of the Lagos State Traffic Management Authority (LASTMA) and officials of some local governments in the state, including the committee set up by the state government for the removal of abandoned trucks is killing haulage business. 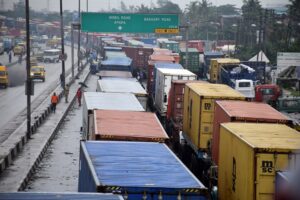 In a letter written to the Lagos State Government and signed by the Chairman of AMATO, Chief Remi Ogungbemi, the association lamented that its members pay between N100,000 and N200,000 to government officials to secure the release of their trucks that were seized.

In the letter, AMATO described the activities of these officials as ‘ignoble’. “For the Committee on the Removal of Abandoned Trucks, they invade various empty container depots at midnight to hijack trucks not constituting any road obstruction on the normal single lane to either drop or load empty containers. They always go with hoodlums that are armed with dangerous weapons”.

Not done yet, he added that the officials “beat and injure drivers and their motor boys in the process of hijacking trucks. They forcefully collect trucks from drivers and drive the trucks away to their various yards while booking the trucks as being towed. After this, they slam bills ranging between N100,000 to N200,000 as ransom before the trucks can be released. The amount can only be reduced if you know somebody at the top”.

“For LASTMA officials, they go about like hawks searching for chickens to catch. They arrest trucks that have not committed any traffic infraction indiscriminately and unnecessarily day and night”

“Also, some local governments are also involved in blocking and arresting of trucks on federal and state roads in order to impose tickets on truckers in collaboration with hoodlums.

“Most of the traffic agencies work with street urchins (area boys) all over the State metropolis. Apart from working as their informants, these hoodlums sometimes deliberately immobilise trucks by loosening truck breaks, deflate tyres, remove truck battery and container hooks in order to force driver to settle them or invite LASG traffic agencies to come and arrest, tow or drive them to their yard under such questionable circumstances and slam outrageous bills”, he had lamented.

The above submission by AMATO summarises the chaos that Apapa and its environs have become. The above depicts the fact that all manners of state and non-state actors arev make fast and illegitimate money through extortion of truckers.

Apapa is very strategic to the economy of Nigeria; it is linked to the rest of Lagos by two major highways; the Apapa – Oshodi expressway and the Western Avenue (Funso Willaims Avenue). Of course, it can also be approached by water from Mile Two (on the mainland) and Marina (on the Island).

What is happening in Apapa is not unexpected, but it is avoidable. Apapa has the privileged location as home to Nigeria’s two foremost seaports which are currently being managed by nine terminal operators.

Between the two ports (Lagos Port Complex and Tin Can Island Port) more than 65 percent of dry cargoes and about 90 per cent of the nation’s liquid (petroleum products) are handled. This is because it hosts about 70 tank farms (and still counting). These are in addition to the many banks, shipping companies/agencies, licensed customs offices, factories and numerous other businesses that are located in this port city.

For years, the state of the two approaches has terribly impacted on the highbrow residential areas like Apapa GRA, Beachland estate, and of course, the low income residential but hugely populated areas such as: Ajegunle and Ijora.

No matter the argument, the presence of petroleum products tank farms has brought untold hardships to residents, owners of businesses, motorists and workers in Apapa.

We recall that, in a bid to stem the tide of debilitating traffic into the port city of Apapa, the Federal Government constituted a task team headed (on paper) by Vice President; Yemi Osinbajo, but also had a former Commissioner for Transport in Lagos state; Mr Kayode Opeifa as the Vice Chairman, and the man-on-ground.

Whether or not Opeifa’s team succeeded is a matter for another day, but the general opinion of stakeholders is in tandem with that of the Minister of Works and Housing.

In the face of the apparent inability of the Opeifa team to arrest the situation, the Nigerian Ports Authourity (NPA) unveiled its novel electronic call-up and technology-driven app, called ‘eto’, which it said would be required to assess the ports as from 27th February 2021.

The NPA e-call up came after the Lagos state intervention started showing signs that it might go the way of the federal government task team before it.

Read Also:  How do you think the government can reduce extortion along the port access road

Even though the electronic call up is working, the overbearing influence of security, non-security agencies and street urchins have made a mess of all that government has done to ensure a free flow of traffic in and around Apapa.

We are totally in support of the recent decision of the Lagos state government to disband the ad-hoc teams of the Committee on Removal of Abandoned Vehicles (RAVC).

By disbanding the committee, the Lagos state government has confirmed the fears of various truckers unions, including AMATO, the Council of Maritime Truck Union Association (COMTUA)and others.

We agree with the state government that the committee had become an embarrassment. Its members wantonly arrest vehicles and towed them away for huge sums to be paid as bribe before they are released.

The latest suspension is not the first time that the government’s hammer will be falling on the committee. But it is our hope that, this action will bring respite to the truck owners who have been victims of the overzealous and corrupt government officials.

Perhaps, it is time that the NPA further challenged the operators of the electronic call up system. A full automation of trucking is required for extortion to end. A fully automated trucking system will not require the various units of law enforcers along the port corridors, be it from Ijora or from Mile 2.

It is time to totally remove the involvement of third parties, including the check points along the way in truck call-up system.

We also think that proliferation of transport unions and associations is aiding extortion in the port corridors. These associations are only interested in levies and illegal collections from truckers. To stop extortion, government should also ban collection of levies from drivers and owners of these articulated trucks on the roads. Levies and union dues are to be collected at their offices.