Top 10 Busiest Ports In The World

The marine domain has increased by leaps and bounds in the past few decades, necessitating port and harbour facilities to accommodate these ever-increasing requirements.

This is precisely why shipping authorities in every nation, are focussing on ensuring that their shipping ports are adequate to cater to the needs of the industry operators and drivers.

However, even while each nation focuses on improving its port infrastructure, there are a few global leaders with marine ports – bigger and busier than all others.

It is interesting to know that the busiest port facilities are situated in Asia, given the continent’s geographical position amidst crucial maritime trade routes connecting European and Middle-eastern ports.

Listed below are details about the 10 busiest ports in the world, each singular and unique in its own right. 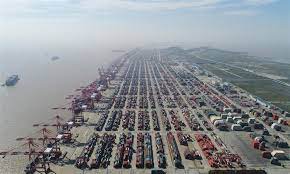 The Shanghai Port tops the list of the busiest ports in the world in 2022. Located in the People’s republic of China, in the city of Shanghai, this port is also regarded as the world’s most rapidly growing economy.

The Port of Shanghai took over, from its Singaporean counterpart, the title of the world’s biggest port in the year 2019 handling a whopping 37.1 Million TEUs of cargo volume.

The port forms a very viable maritime porting channel for the River Yangtze and the East China Sea. The construction and development of the port have been acclaimed to be the crucial factor in the development of the city of Shanghai.

Spanning an area of 4 km2, the port is a crucial centre of maritime international trade and commerce, laden with the latest infrastructural facilities and a giant network of freight and passenger links connecting it with important trade routes around the globe.

In 2020, the annual cargo traffic handled at the port surpassed 43.5 million TEUs, making it the globe’s busiest container facility.

Comprising 125 wharves and 19 terminal facilities, the port is capable of accommodating the world’s biggest ships and carriers. Apart from the 5 major port areas, the port also contains a cruise ship terminal with an annual handling capacity of more than 1 million people. More than one-fourth of China’s trade is handled at Shanghai port.

Considered to be one of the world’s leading busiest ports, the Singapore port is a collective identification to all porting terminuses encompassed with the port.

Singapore has been instrumental in helping to re-shape the Singaporean economic system. Regarded to be the biggest hub for transhipment activities, about 30.9 million Twenty-Feet Equivalent Units (TEUs) were handled by the port in 2019.

The Singapore port is the world’s busiest container transhipment facility, offering maritime trade connectivity with 600 seaports in over 100 countries. Also, Singapore port is one of the largest bunkering facilities in the world.

The port’s multipurpose terminals are situated at Keppel, Pasir Panjang, Jurong etc. A fully mechanised terminal is also being constructed at Tuas, expected to be completed by 2040, with a handling capacity of 65 million TEUs.Upon completion, it would be the largest fully-mechanised terminal facility in the world.

The port offers an array of services to its national and international customers, including ship repairs and maintenance, cold storage facilities, container washing, and container tracking. 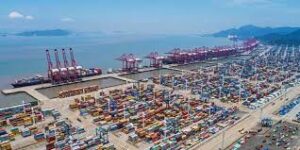 The Ningbo Port is situated on the coast of the East China Sea in the province of Zhejiang near Hangzhou bay. It is the third busiest port in the world that handle more than 28.72 million TEUs in 2020. The port has shipping links with 600 ports across 150 countries.

The port comprises 19 port regions and more than 300 functional berths capable of accommodating vessels weighing over 50,000 DWT. Its biggest terminals are the crude oil handling facility, international container terminal and a specialised terminal for handling liquid chemicals. These aforementioned facilities handle the world’s biggest ships and carriers, weighing over 200,000 tonnes.

The Port of Ningbo has gained a reputation for providing quick and reliable services to its customers, owing to its high-tech logistics system and world-class container handling facilities. World’s top shipping companies have their offices in the port premises.

Shenzhen port comprises numerous ports spanning the Shenzhen shoreline, in Guangdong, China. It is divided into two main eastern and western port areas, comprising 5 major terminals. In 2020, the port handled more than 26.54 million TEUs, making it one of the busiest ports globally.

The port of Shenzhen caters to industrial units and companies situated on the delta of the River Pearl. It was in number 3 position with a total volume of trade > 24 Million TEU in 2019.

The port is regarded to be the second most engaged shipping port in China, especially in the Southern part of the Chinese mainland.

The port is linked with 300 major ports spread in over 100 nations. Also, around 40 major shipping companies situated at the port have started over 120 container lines from the port.

*To be concluded next week