The Biden administration is quietly asking its partners in the EU and the UK to soften a recently-announced ban on marine insurance for Russian oil cargoes, according to the Financial Times. 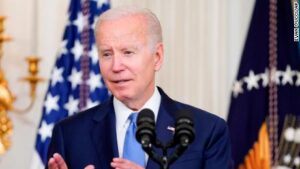 The ban was agreed at the end of May, and when it takes effect, it will cut Russian energy exporters off from the Lloyd’s market and from the International Group of P&I Clubs, which provides about 95 percent of global cover for tanker liability. It will also cut off Russian cargoes from much of the reinsurance market, which is heavily concentrated in Europe.

The expectation of a coming ban is already having an effect, according to Reuters: Western insurers have already begun shying away from Russian oil cargoes, leaving the tanker operators who are willing to move the crude with fewer options. The effects of these early “self-sanctioning” decisions will begin to be seen as early as next month, shipping executives told Reuters, and oil traders have already begun pricing in the effects.

The concern in Washington is that a full insurance ban would make trade in Russian oil nearly impossible, and it would remove up to eight percent of the world’s crude supply from the market. After all, this is the stated objective of the ban, and it is likely to succeed in cutting the Kremlin’s income. However, the resulting supply shock is expected to cause another jump in energy prices for everyone, right before the U.S. midterm elections.

In a recent editorial, prominent economist Olivier Blanchard estimated that cutting off Russia from the global oil market could lead to a crude price hike of 20-30 percent. This would have damaging effects for the global economy, not just for Russia. Instead, he suggested, it would be less damaging if the EU and UK were to allow Russia to keep shipping oil – but only if it sold at a low price. “The policy aim should be to make it very expensive to handle Russian oil cargoes, but not prohibitively so,” he argued.

According to the Financial Times, the Biden administration is asking its European partners to soften the marine insurance ban in exactly this way – to allow some Russian oil exports, but only for cargoes sold below a certain price threshold. However, the FT reports that this idea is not taking hold among policymakers in the EU, who have already legislated a full insurance ban and have no plans to revisit the issue.