The U.S. asked the World Trade Organization’s members to address the problem of forced labor on fishing vessels, seeking the issue to form part of ongoing talks to curb subsidies in the industry. 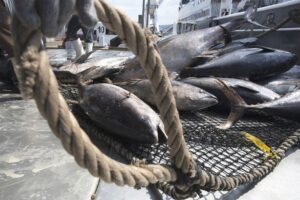 The U.S. proposal also calls for WTO members’ explicit recognition of the forced-labor problem and proposes additional transparency with respect to those vessels or operators that use forced labor, the U.S. Trade Representative said in a statement Wednesday.

“Forced labor harms the lives and well-being of fishers and workers around the world and it must be eliminated,” U.S. Trade Representative Katherine Tai said in the statement.

Global leaders in 2015 tasked the WTO with ending excessive and illegal fishing through eliminating government subsidies that spur companies to deplete the world’s fish stocks and threaten coastal economies. Negotiators have failed to reach an agreement.

WTO Director-General Ngozi Okonjo-Iweala has made the issue her top priority, and plans a July conference that could help seal an international accord.

“By using all tools, including trade mechanisms like this, the U.S. can ensure that our seafood is not the product of illegal, unreported and unregulated fishing or forced labor and other human-rights abuses,” Oceana Vice President Beth Lowell said in a statement. “All seafood sold in the U.S. should be safe, legally caught, responsible sourced, and honestly labeled.”