The UK Hydrographic Office (UKHO) has taken a major step on the path to digitalization in the shipping industry: the end of Admiralty paper charts. 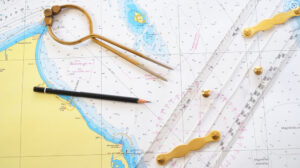 Durable, tangible, and with no batteries required for use, the paper chart has been a mainstay of maritime navigation for centuries. Generations of mariners have relied on paper charts for voyage planning and positioning. But the times have changed, and automatically-updating electronic charts have become the default option – especially after the SOLAS mandate for the transition to ECDIS took effect.

Last week, the UKHO announced that it will also phase out global paper chart production by late 2026. Its Admiralty charts are the most widely used paper charts globally, and the decision will affect stakeholders in many regions; however, UKHO says, most mariners have already made the switch to digital.

The agency is winding down paper chart production because its customers are “primarily using digital products and services for navigation” and it has seen a “rapid decline in demand for paper charts.” The decision will allow it to focus on its 18,000-plus electronic charts and other digital products.

“The decision to commence the process of withdrawing from paper chart production will allow us to increase our focus on advanced digital services that meet the needs of today’s seafarers,” said Peter Sparkes, UKHO’s chief executive. “Shipping is moving quickly towards a future underpinned by digital innovations, enhanced satellite connectivity at sea and optimized data solutions, supporting the next generation of navigation. The UKHO aims to be at the vanguard of this digital transition.”

UKHO says that it will work with the UK Maritime and Coastguard Agency, commercial distributors, and other stakeholders to help remaining paper chart customers transition to electronic products by the deadline. “We understand the significance of this announcement, given the distinguished history of the UKHO’s paper chart production and the trust that mariners have placed in Admiralty charts over the generations,” said Sparkes.

UKHO is following in the footsteps of its American colleagues. In 2019, NOAA announced plans to phase out phase out paper nautical chart production by January 2025. The decision marked a sea change for the agency, which has produced America’s paper charts (and charts for much of the rest of the world) for decades. Like UKHO, NOAA is redirecting its resources to focus on the quality of its electronic chart products and to provide larger scale coverage.

It is not quite the end of the paper chart in the United States, however: American seafarers will still be able to order custom-printed charts based on electronic data.