The recent political upheaval in Guinea might affect freight rates of Capesize vessels in the region over the next few weeks, but the impact might not be sustainable in the long term due to the Chinese clout in West Africa. 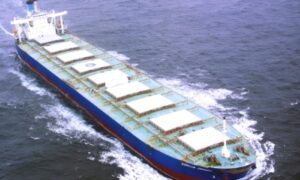 The ongoing political turmoil in Guinea worsened further when the armed forces toppled the 11-year-old regime over the weekend. The unrest has created uncertainty around bauxite mining and supply-chain activities, raising questions about the smooth functioning of shipping activities, particularly the country’s dry bulk shipping.

Bauxite generated 4.5% of the total global dry bulk shipping demand (tonne miles) in 2020, of which 72% was generated by Guinea alone.

Over the past five years, Guinea became the largest bauxite supplier globally, leaving the other major exporters, Australia and Indonesia, far behind. Over the same period, China strengthened its position as the largest bauxite importer. The entire increase in global bauxite trade over the past five years has completely been sucked up by China as it was left with almost no option in the wake of the ongoing dispute with Australia and Indonesia’s decision to restrict exports of unprocessed minerals and ores.

The transition of power in Guinea might delay the mining operations, forcing disruptions in bauxite loading and affecting bauxite trade on the Guinea-China route. A decline in trade will affect the Capesize freight rates in the region as more than three-fourths of the total bauxite from Guinea is exported on Capesizes/VLOCs.

Additionally, bauxite exports from Guinea seasonally decline in the third quarter, hampering the demand for bigger vessels in the region. The added pressure of the political unrest in the country would further squeeze the demand for such vessels which should soften freight rates over the next few weeks, but for the massive congestion in China.

Earnings of Capesize vessels have been very high since the beginning of this year, mostly driven by congestions, initially at the ECSA and Australia and then by a strong build-up of waiting vessels at Chinese ports. The demand for dry bulk vessels has also been high to ship commodities to fill the gap created by the pandemic in 2020. If the congestion eases and bauxite trade gets affected as well, rates might soften.

However, any impact on shipping demand and eventually on freight rates would be short-lived because of two reasons:

Most of the mining and shipping activities in the region are directly or indirectly controlled by China which might put its weight behind regulating them.

These activities (mining and shipping) are significant for Guinea’s economy, and any political group will prefer to distance itself from disrupting the bauxite supply chain.

Growth in bauxite trade on Guinea-China will depend on the demand from Chinese manufacturers, and any impact of Guinea’s political coup would only be short-lived.