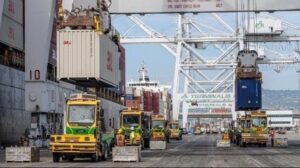 The FMC last week, said it has asked the top 20 shipping lines calling on U.S. ports to provide information on how they are complying with the new prohibitions.

The added protections against retaliation were created by Section 5 of OSRA and became effective immediately upon the law’s enactment this past June. The prohibitions apply to common carriers, marine terminal operators (MTO), and ocean transportation intermediaries.

The probe, being conducted the Commission’s Vessel-Operating Common Carrier (VOCC) Audit Team, is examining how ocean carriers are adapting to the increased prohibitions on retaliatory and discriminatory behavior. The team will specifically focus on how companies are training personnel at all levels to act legally, and how those same employees are being made aware of the consequences for violating the law.

“The Ocean Shipping Reform Act made it clear that it is absolutely illegal for ocean carriers to discriminate or retaliate against a shipper for filing a complaint or challenging a charge,” said FMC Chairman Daniel B. Maffei. “The FMC will thoroughly investigate any allegation of illegal behavior and prosecute aggressively when warranted. This is something that everyone in a company, from the newest sales associate to the CEO, must understand and that is why the VOCC Audit Team is carrying this message directly to ocean carriers serving the United States. Even a simple verbal threat to a shipper from an ocean carrier employee could undermine U.S. law and will not be tolerated.”

The probe kicked off earlier this week via correspondence with the shipping lines. All recipients will have until mid-January to provide their initial responses. The VOCC Audit Team will also discuss this topic in person and in deeper detail with the 11 largest carriers participating in the next round of meetings through the VOCC Audit Program, set up to allow the FMC to engage directly and more frequently with ocean carriers to raise and resolve issues.

The top 11 carriers were reached through their designated compliance officer. One of the Final Recommendations Commissioner Rebecca Dye made at the conclusion of her fact finding investigation in May into the effects of COVID-19 on the ocean shipping supply chain (known as Fact Finding 29) was that all ocean carriers and MTOs designate a Commission compliance officer who reports directly to the most senior executive responsible for business in the U.S. Each of the companies participating in the audit program voluntarily adhered to the recommendation.

The VOCC Audit Program was established in July 2021 by Chairman Maffei with the initial mandate of assessing ocean carrier compliance with the FMC’s rule on demurrage and detention. In March 2022, Chairman Maffei ordered the program’s scope expanded to also evaluate how shipping lines serve U.S. exporters.