A court in Mauritius has handed a 20-month prison sentence to the captain and first officer of Wakashio, a Japanese bulk carrier that ran aground off the Mauritian coast in 2020, causing a massive oil spill. 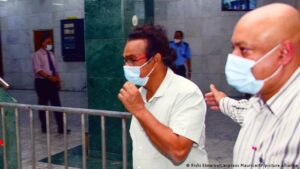 “The court took into consideration the fact that both defendants pleaded guilty and apologized. The sentence handed down is 20 months in prison,” magistrate Ida Dookhy Rambarrun said.

Sunil Kumar Nandeshwar and first officer Hitihanillage Subhoda Janendra Tilakaratna were arrested in August 2020 by the Mauritius Police Force after causing the bulk carrier to run aground and cause an ecological disaster.

The two men were found guilty of endangering safe navigation.

The probable cause of the devastating grounding and oil spill from Wakashio off Mauritius were unsafe behaviors due to overconfidence that stems from complacency, Japanese shipping company MOL said in December 2020. In addition, a crewmember neglected appropriate watchkeeping.

“The captain and his second-in-command were irresponsible and did not deliver as they should on their ‘navigational duties’,” the magistrate said on 27 December 2021.

The Panama-flagged Wakashio had run aground on the coral reef off Pointe d’Esny on 25 July 2020. The bulker, chartered by MOL from a subsidiary of Nagashiki Shipping, split into two ten days later. The ship had approximately 3,800 tonnes of very low sulphur fuel oil (VLSFO) onboard and 200 tonnes of diesel oil. At least 1,000 tonnes of fuel were believed to have leaked into the ocean.

The grounding occurred in an environmentally sensitive area, near a marine park and wetland sites of international importance. It is also a popular tourist destination. Early salvage efforts were hampered by sea conditions at the reef, combined with the logistical challenges of getting equipment and personnel to site under COVID-19 restrictions.

Wakashio’s bow was sent out to its final resting place in late August 2020 following a scuttling operation that saw the ship’s front sunk in Mauritian waters.