The acting president of Association of Nigerian Licensed Customs Agents (ANLCA); Dr. Kayode Farinto has urged all aggrieved members of the association to overlook and forgive all imperfections of any member who tried to truncate the development agenda of the association in 2022. 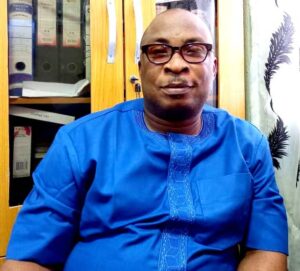 In his new year message, the acting president said there is need for all warring members to return into the warm embrace of the body, even as he said the leadership of the association is ready to accept and forgive the misdeeds of those who have gone astray while upholding the tenets of the association constitution.

Farinto also called on the Federal Government to as a matter of urgency, establish the federal ministry of Maritime, as a bold step forward to revamp the maritime industry in Nigeria.

He stressed that it was high time the government stopped lumping the maritime industry with the Ministry of Transportation, noting that it had huge potential if allowed to perform on its own with technocrats put in place to run its affairs.

He noted that with the scope of the transportation ministry, maritime had not attained the set goals in the last four years of the Buhari-led administration, hence the treasures of the seas left yet untapped.

He further explained that with the creation of the maritime ministry agencies such as Nigerian Inland Waterways Authority (NIWA) if put under the maritime ministry will be able to achieve its full potential. Farinto described the nation’s inland waterways as a cash cow long overdue for harnessing.

He stressed that the waterways abound with economic potential capable of boosting the country’s gross domestic product.

Farinto said Nigeria can only achieve greener shipping via the creation of the ministry, he said the ministry would provide an opportunity to focus on the importance of a sustainable maritime sector.

He said, “the Ministry of Transportation is very big, which is why they cannot oversee all the departments under it. By creating a maritime ministry, we will reduce cost, create employment and generate more revenue and bring up innovation in the industry.

“Government should take the maritime sector seriously by fixing all the dilapidated infrastructure in the industry.”

He informed that the creation of a maritime ministry would also aid Nigeria’s participation in African Continental Free Trade Agreement trade that’s yet to begin, despite all efforts of the country to begin trade in the year 2022.

He although praised the level of work done by the Co-champion on Transportation, Mrs. Funmi Folorunsho, but lamented that the Nigerian government had failed to show commitment towards the actualisation of AfCFTA, which according to him, would be of great advantage to the country if properly managed.

Speaking further, the ANLCA acting President called for the operation of the National Single Window (NSW), explaining that the absence of the Single Window platform is responsible for most of the challenges stifling trade and compounding cargo clearance process at the nation’s seaports.

He informed that Nigeria remains one of the few countries in West and Central Africa that has not fully operated the single window platform and as a result affects ease of doing business initiative and efforts aimed at improving efficiency at the port.

” So we need to just have one, because the creation of a single window will give us enough security, ensuring that our waterways are secure and the stoppage of psychotropic substances will be eliminated.

On the Nigeria Customs Service (NCS), the ANLCA acting president called on the Federal Government to appoint core competent trained officers to pilot the affairs of the service as against appointing retired military officers as CG of the service.

Farinto also urged the federal government to provide more scanners at the port stating that the one’s procured are not enough while bemoaning the attitude of some Customs officers who despite the presence of the scanners still subject cargoes to 100 percent cargo examination.

According to him, “scanners are not enough; the very few one that are functional, we still have situation where some security agencies do not rely on the scanning image analysis they want to subject cargo to the initial physical examination so everybody should key into the scanner image analysis report and since in line with what customs says that every agencies can have the scanner results in the comfort of their office then we should begin to look into that direction.

“Then the role of Customs police should be confined to only disciplinary measures for the officers, they do not have any value to add to cargo clearance” he stated.

He added that “There are a lot of factors militating against the maritime industry in Nigeria, including “Lack of infrastructure like scanners to speed up cargo examination by Customs and other Government Agencies.

He added that there is also a need to delineate the port area which he said is very important in order to decongest the ports area from non-ports area.

He said this will also reduce the activities of miscreants, thieves and all vices along that corridor.

Others, according to him, are lack of a functional railway system for immediate evacuation of containers out of the port, activities of miscreants within the port corridors, and corruption and sabotage in the system.