Bulk carrier ADAPEARL requested medical assistance off Agrigento, southern Sicily, on Jun 2, reporting sick crew. The ship interrupted her voyage from Fethiye Turkey to Spain and anchored off Agrigento at around midday Jun 2. Understood 43-year old Captain of Turkish nationality got ill, with heart attack symptoms. He died, his body was transferred to hospital, coroner confirmed heart attack as the cause of death. As of 0500 UTC Jun 3, the ship remained anchored off Agrigento. 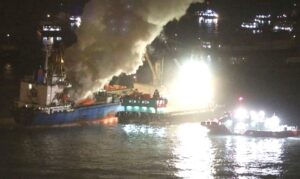 Fire erupted in cargo hold of, understood, general cargo ship AFFLUENT OCEAN in the afternoon Jun 2, in Hong Kong. The ship is anchored south of Stonecutter island, undergoing cargo operations carried out with floating crane and barges, she’s reportedly loaded with some 2,000 tons of steel products. A thick white smoke emanated from the ship, reaching Kowloon residential areas. As of 1500 UTC Jun 2, firefighting looked to be still under way, with deployment of water cannon tugs and fire boats.

It took 15 hours of continuous firefighting to put the fire out, was reported extinguished by 0820 LT (UTC +8) Jun 3. the ship developed heavy portside list, most likely due to water poured into cargo hold during firefighting. Understood – judging from photos – the ship was loading scrap to be shipped to Vietnam. No injures reported. All crew including Chinese and Indonesian nationalities were evacuated and put under quarantine.

Egyptian offshore supply tug INSPECTA 7 reportedly sank in Gulf of Suez off Ras Ghareb, Egypt, early in the morning Jun 2. 11 crew rescued, Captain and Engineer are reported to be missing. It is believed, as of now, that the ship struck underwater wreck, got breached and sank due to massive water ingress.

Unconfirmed report emerged on May 31 saying that Master of tanker was medevaced by helicopter in Kattegat, early in the morning May 31. According to the report, by the time of medevac Master was already in coma. Waiting for confirmation, updates. Details and ship’s ID are known, but will be published after confirmation.