FPSO Taking On Water In Nigeria

FPSO SEA EAGLE reported water ingress on Jul 24, she’s positioned in EA field southwest of Warri, Nigeria. As of morning Jul 29, there weren’t yet detailed and timely updates, to figure out what happened, what’s going on and what are ship’s status and condition. AIS seems to be working, latest position received at around 2300 UTC Jul 28. The leak didn’t affect oil storage area, said FPSO operator SHELL.

Sea Eagle FPSO is situated in the EA Field, offshore Nigeria, some 8nm SW of the Dodo River. General overview: The FPSO is permanently moored in a water depth of 26.5m. Crude oil is transferred by floating hose while export tanker is moored in tandem to the FPSO, a Safety Exclusion Zone of 5km is in force.

Speaking, spokesperson for the Shell Petroleum Development Company of Nigeria Limited, Michael Adande, said the incident did not affect the area where crude oil is stored on the FPSO.

Adande explained that the relevant authorities have been notified, adding that measures to contain the water inflows as well as repairs were ongoing.

“On Sunday, 24 July 2022, our Offshore Installation Manager on board of the Floating Production Storage and Offloading vessel, Sea Eagle, reported a leak in the hull of the vessel.

“The FPSO is anchored in the shallow waters. Relevant authorities were notified.

“The leak did not affect the section of the FPSO where any crude is stored. Measures to contain the water inflow have been adopted successfully. The repair works are ongoing.

General cargo ship NARVA ran aground at around 0300 LT (UTC +10) Jul 27 at Cape Ostrovnoy, east of Nakhodka, Primorye, Russia, Japan sea. The ship is en route from Vladivostok to Okhotsk Port, Okhotsk sea. As of 0100 LT Jul 28, the ship was still aground, according to track. No information on damages, salvage, oil leak if any.

Fire erupted in cargo hold of general cargo ship NOVA berthed at Eemshaven, Netherlands, in the afternoon Jul 26. The ship loaded with wind turbines parts, to get to the hotspot inside cargo hold firefighters had to remove or relocate cargo on deck and in hold. Fire is said to be under control or extinguished, it started in one of the containers in hold bottom.

Bulk carrier collided with fishing vessel or fish carrier in Busan outer anchorage waters at around 0200 LT (UTC +9) Jul 26. Both ships were under way, both sustained damages, both were anchored after collision. According to available data, bulk carrier can be identified as WOORI SUN, she left anchorage several hours after accident, and resumed sailing in NE direction, destination not specified. 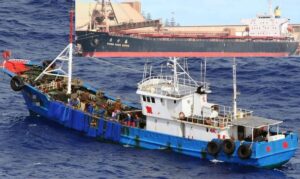