Home » What Is Blank Sailing And Why Does It Happen?

Ocean cargo vessels usually have a fixed route and ports of call that are known as Schedules. 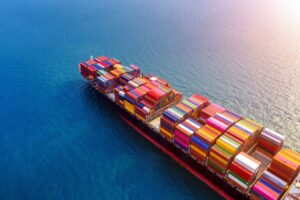 An ocean vessel has a fixed number of days to complete the schedule and get back to its base. The ship takes cargo from these ports and discharges them as per their bookings at the respective ports of discharge.

The ship’s voyage might also include stops for routine bunkering and other maintenance of the vessel.

When an ocean vessel does not call at one or more of its scheduled intermediate stops, it is called a blank sailing or void sailing from these ports.

It could be from one or two specific ports or the entire voyage could be cancelled.

When the entire voyage is cancelled it is called ‘blanking the string’. Customers who have been waiting to load or offload cargo will find that they have to wait for the next sailing to pick up or drop-off their cargo.

The list of ports that are served by the carrier is called a ‘string’.

Let us say, a carrier sails between port A and port D. In this case, the carrier sets sail from port A, reaches port B, then C, and finally its destination port of D.

At port D, it offloads goods as well as takes in goods meant for port A. It then sails for port A.

These ports from A to D is called the string.

As it can be seen here, the vessel completes a circle and reaches back at the port from where it started.

The voyage taken by the vessel is usually in a fixed ‘circle’, in the same direction, with a timetable of fixed arrivals and departures at these ports.

Blank or void sailing may be understood better with the following example.

Why Do Blank Sailings Happen?

The total number of days in a vessel’s schedule would include its sailing days, days taken for loading and unloading, and any other known factors.

When the ship is unable to meet any of these deadlines, it is sometimes forced to skip certain ports of call.

Generally, blank sailings are planned at short notice by shipping lines to meet certain uncertainties. It might be the only way to counter internal or external issues.

An internal uncertainty is when there is a low demand for container space onboard a certain vessel, covering a specific string. In such an event, the shipping line might cancel calling at one, two, or more ports from where there is no booking of cargo at all or when bookings are marginal.

It is common to have blank sailings following major holidays as cargo bookings will be low immediately after such holidays.

Carriers might also decide to change the complete string. This usually happens when shipping lines merge or when carriers enter into agreements and form alliances.

A new alliance or agreement might decide to change a string to optimize cargo capacity and bring down costs.

During the second and third quarters of the year 2020, several trans-pacific and Asian lines had cancelled strings and blank sailings due to the very low demand for cargo space as a result of the coronavirus pandemic.

The container market is currently picking up, but at a very slow pace. Shipping alliances have so far cancelled hundreds of services on account of low cargo volumes.

The services between Asia and North America are the worst hit. This is an unexpected situation as everyone had expected the pandemic to be brought under control within a short time.

Carriers also resort to blank sailings so that the few services that sail will go with full cargo loads. Besides helping them optimize their services they also use this as a factor to push up their rates. However, such rearrangements require careful logistics and planning.

Blanking sailings can happen in the event of a vessel running into mechanical problems that call for repairs that can only be done from certain ports.

Recently, the International Maritime Organization (IMO) implemented a regulation that capped the sulfur content in marine fuels to 0.5%. Before this, it was capped at 3.5%. This new regulation came into effect on 1 January 2020 to control marine pollution and in line with other global pollution control initiatives.

As soon as the announcement was made by the IMO sometime in early 2019, vessel operators went into overdrive getting their large container vessels retrofitted with the Exhaust Gas Cleaning System (EGCS), commonly known as Scrubbers, that would help these vessels meet the IMO’s requirement.

Due to the large demand for having these scrubbers fitted to vessels and a lack of trained staff to carry out this work, there was soon a backlog of vessels lined up at shipyards that were equipped to carry out this work. This in turn led to blank sailings on a global scale around this period, leading to space constraints on several sectors.

What are the external uncertainties? These could be port strikes, labour unrest, weather warnings, etc. that could affect the vessel’s timely berthing and resailing from a port.

Port strikes and labour unrests usually drag on for a long time. Berthing of vessels and ship husbandry services can be severely affected during such periods of unrest at ports. Weighing in all other factors, a vessel may decide to skip such a port and continue with its voyage.

Weather forecasts and warnings are usually provided by the meteorological department of a country. Violent tropical storm warnings at certain locations may require that vessels passing through ports in such areas cancel their trip.

In other instances, though rare, ships may decide to ‘wait-out’ on such natural phenomena at a safe distance as prescribed in the safety manual of their company, until berthing or sailing is once again considered safe.

Blank sailings are usually informed to customers by the carrier or the carrier agent through its sailing schedules. Major vessel operators such as Maersk, MSC, COSCO, CMA-CGM, etc. have monthly advisories that inform customers regarding blank sailings.

Cargo that is booked on a blank sailing has to be re-booked on the next available vessel. This can be a tricky situation as there might now be a build-up of cargo due to the absence of service.

Stevedoring functions at such ports could also be impacted as they have to deal with this unexpected volume of cargo. The frequency of service from the blanked port is another factor to consider.

The gap between services could compound the problem further; it could be weekly, fortnightly, or monthly. If not planned meticulously and executed correctly, blank sailings can affect cargo movement adversely.