What is your assessment of Mr Hassan Bello as the CEO of Nigerian Shippers Council? 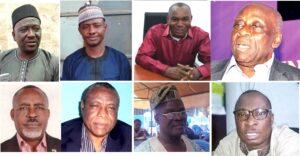 He is someone who is very determined and dedicated to what he was assigned to do. He achieved much during the period of his tenure as the CEO of the Shipper’s Council. I believe if they had synergy with sister agencies we would not be facing the challenge of traffic gridlock in our port access roads. He has done a lot.

Everybody would testify that if not because of his zeal and way of approach during the COVID 19 pandemic, the port and terminals operations will be totally down. He was very passionate about his job and the way he interacted with the stakeholders. That is why despite the pandemic, the port was still in operation. From my own assessment, we will really miss Hassan Bello.

Hassan Bello was a huge success; not only to the council, but also to the national economy at large. To me, he is an iconic game changer. He has positively influenced the lives of many in different ways. He has enhanced the transport of Nigeria’s economy that is, both export and import. He always preaches the gospel of peace and encourages staff members to seek their legitimate right making sure everything is done in line with what the law has said.

In the aspect of promoting trade facilitation in the country, he has also used the Shippers Council to touch the lives of the consignees and consignors of this age within the country. He worked on the arbitrary charges by ensuring that illegitimate services which some shipping companies and terminal operators are making on shippers are being regulated and controlled. He believed in fair play and served as an impartial judge. Hassan Bello is an asset to the national economy. I believe NSC will never forget his tenure.

The NSC under Hassan Bello became popular because of the drive to bring a new consciousness in the clearing of goods in the port through the “New Port Order”. But people who enjoyed the old order were resilient in the resistance of bringing in a change. The pressure from these oppositions was turbulent in the past four years.

By and large, he tried all he could to bring in the new port order and we thank him for all the sacrifices he made in allowing the port to continue to receive cargo. Every beginning has an end. We all wish him good luck because he tried his best to revolutionize the maritime sector through the key position as the port economic regulator. The NSC is now known in the environment not as a Shippers Council to protect shippers only but also as an economic regulator.

Hassan Bello is a quintessential gentleman. He is a thorough professional, a legal mind that impacted the agency he headed. He is an innovative personality. He likes and creates ideas. He intervenes in issues that affect all stakeholders whether importers or exporters including the ship owners and I believe that Hassan Bello has created a platform for the agency to grow.

He has followed the initiatives he has created including the Inland Container Depots with zeal and passion which is beyond the call of duty. I salute Hassan Bello because he has done a lot and his talent will still be needed in the Maritime space. I wish him good luck.

Once that one is done, and the agency is empowered, the shipping service providers, cargo owners, the users of the port facilities, and the common man who buys the goods at very exorbitant prices now we have a bill to sign on a list on the part of the common man. This is because if the economic regulator has done its job very well, they should transmit to the better prices of items in the final market.

He revolutionized the sector. He also brought about changes in terms of regulation of the sector Vis a Vis charges imposed on importers by shipping companies and also the terminal operators who took NSC to court on several occasions and NSC defeated them. He is a man that has that interest of the industry and the common man at heart. If he had not fought the mafia, the consumer products today will be very much out of reach by the common man.

He was able to use his knowledge as a lawyer to achieve that success. Despite the low budget of the NSC compared to other sister agencies, he was able to achieve huge success in terms of regulation and at the same time other projects of the council that are domiciled nationwide. He was part of the efforts of the government to revive the railway system in terms of transporting cargoes to the inland container depots (ICDs) which was established at the geopolitical zones. He achieved a lot and never got distracted.

A tenure is determined to be good or bad through its achievements. I so much like and commend him because we recorded a lot of achievements during his tenure. When I heard he was retiring I was surprised. If I have my way, I wish the constitution that says he should retire or sent forth should be reviewed so that he can continue inasmuch as any constitution can be reviewed.

There are lots of works that he has started, especially with the truckers which I expect him to complete before he retires. Now that he has left office, I don’t know if his successor will continue these projects. I think people in authority should allow him complete all these noble projects before retiring or transferring him. I like the way he handles issues and intervenes in matters. He is a man of the people.

Hassan Bello was a trailblazer. He had a smooth account during his tenure. I can say Hassan Bello came, saw and conquered. He added value during the little period he spent as the CEO of the Nigerian Shippers’ Council. He is one of those who deserves a national award in this country.

What do you think is responsible for the high number of unemployed seafarers?