Why NPA’s Electronic Call Up Collapsed—Stakeholders

Stakeholders in the nation’s maritime industry have given reasons the electronic call-up system of the Nigerian Port Authority (NPA) have collapsed. 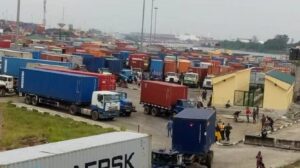 They cited the return of trucks and the traffic congestion in the adjoining roads that lead to Apapa as evidence of the failure of the new call-up system for trucks.

The stakeholders blame lack of stakeholders’ engagement and the suspension of the former Managing Director of NPA for the failure of the new system.

In a chat with our correspondent, a truck owner and member of Committee of Maritime Trucks Union Association (COMTUA), Alhaji Abdullahi Inuwa, said lack of stakeholders’ engagement on the part of eto handlers has led to the failure of the e- call up system.

Inuwa informed that for the e- call up to work effectively, the eto handlers need to constantly engage stakeholders with continuous sensitization programmes. He also blamed the ongoing construction at Tin Can as one of the impediments to the smooth operation of the e- call up system.

He said, “I think lack of stakeholders engagement on the part of the eto people has led to the collapse, also if you look at the Tin Can road , you know construction is ongoing, so this also has affected the smooth sail of the eto call up system, there is need for them to constantly engage stakeholders and continuous sensitization will have a great impact, if the e-call up system will work”.

On her part, Hajia Bola Muse, one of the truck garage owners and member of the Association of Nigeria Licensed Customs Agents (ANLCA) however blamed the people for the failure of the e-call up system, she said the e- call up in its entirety cannot be referred to as failure. She blamed users of the new system who, according to her, have refused to adhere to the rules and regulations for the challenges the e-call up has suffered.

“The e-call up is not a failure; I will be the last person to say it is a failure, it is the people that have made it to look as if it is a failure, the system itself is not a failure; but the people, people finds it difficult to obey, they are always looking for ways to cut corners, that is why it looks as if the e-call up failed, if we all do the right thing, the system is there, it will work perfectly”.

However, on his part, another stakeholder; Mr Demola Aromire, blamed the suspension of the Managing Director, of Nigerian Port Authority (NPA) Hadiza Bala Usman for the collapse of the e-call up system.

Aromire said following the suspension of the former MD, the e-call up system has become nothing to talk about, pointing out that although there were some hiccups before Hadiza left, but he acknowledged that it has now degenerated to a complete failure worse than how it was before the introduction of the e- call up system.

“If you ask me, whether it is because of Hadiza’s suspension, I will say it has added to it, and has even ruined the whole system, yes when she was there the e-call up was not working smooth, but it was not as bad as this, the e- call up has now become nothing to write home about, people now see the e-call up as a cash cow, in fact with the way the e –call up system is going, it will be worse than before its introduction.