Female employment remains low in seafaring roles, according to data from IMO and WISTA’s first ever Women in Maritime Survey, but female representation is strong in some shoreside sectors of the industry. On average, 29 percent of today’s total industry workforce is female, and 39 percent of female employees are in mid-management roles. 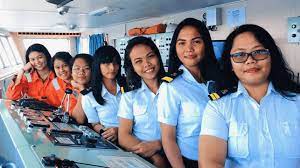 The results suggest that women’s access and participation are uneven from sector to sector. In some professional services sectors – maritime law, marine insurance, marketing and advertising – women make up about half of the surveyed workforce. In the offshore sector, responding companies reported female representation of about four percent. Bunkering, surveying, fishing, shipbuilding and towage all came in under 15 percent.

Women still make up less than two percent of the seagoing workforce worldwide, and most of the total is concentrated in the cruise industry. Respondent companies headquartered in China, the world’s largest maritime country, reported an average of just 0.14 percent (76 female crew members out of 54,211 total).

WISTA and IMO also surveyed 45 member states to learn more about the status of women employed by government agencies. The data suggests that among maritime employers, governments fall towards the middle of the pack. At the national maritime authorities of IMO member states, female representation averaged about 20 percent. In search and rescue divisions, the share was lower at about 10 percent. By comparison, women make up 33 percent of the diplomatic staff in the same nations.

Read Also:  Glossary Of Some Shipping And Maritime Terms

“The Women in Maritime Survey 2021 shines a spotlight on areas in which IMO Member States and the wider maritime industry are performing well – and, more importantly, those where additional attention, resources and encouragement are needed,” said IMO Secretary-General Kitack Lim. “By actively empowering women with the requisite skills, maintaining a barrier free working environment, we create truly sustainable systems of gender equality.”

IMO and WISTA intend to repeate the survey and compile future reports in order to measure progress and guide capacity building efforts.

“As a first snapshot, this survey gives telling evidence of how much work still needs to be done. But it also shows us where there are a few bright spots. The maritime industry can see for itself which sectors are pushing ahead with diversity, and which are not,” said WISTA International President Despina Panayiotou Theodosiou.

SPECIAL INTERVIEW: “No country, I repeat, no government in the entire world can survive without seafarers” – Capt Alfred Oniye