The Federal Government has advocated that special trainings be given to seafarers in order for them to become experts in various fields.

The Minister of Transportation, Mr Rotimi Amaechi, said this while speaking during the celebration of the World Maritime Day event which held on Thursday, with the theme ” Seafarers: At the core of Shipping’s Future” 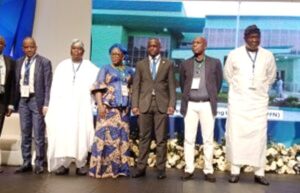 He commended the tremendous impact of the seamen on the world trade and Nigeria’s economy while also advocating for specialized training for the seafarers to be able to become experts in their various fields.

He assured of the Federal Government commitment to ensuring that cadets undergo enough sea time training through the National Seafarers Development Programme (NSDP).

Amaechi stated that in view of the emerging realities, there is need to pay more attention to seafarers’ specialized training so as to make them capable in performing experts tasks in their various fields of engagement onboard vessels.

He explained the efforts of the Federal Government in securing the Nigerian maritime domain, especially with the Deep Blue Project and the SPOMO Act, which he said are yielding results with the recently released IMB report for the 2nd Quarter of 2021 showing a drastic decline in incidences of attacks on our waters and in the Gulf of Guinea.

According to him “the seafarers have over time remained an essential part of the global sustainability chain. Nigeria will continue to play its part in maintaining the value chain through partnerships with organizations that sustain and support seafarers.

“In view of the emerging realities, therefore, more attention should be given to seafarers’ specialized training to be capable of performing experts takes in their various fields of engagement onboard vessels.

“The Federal Government is committed to ensuring that cadets undergo adequate sea time training. The National Seafarers Development Program (NSDP) sponsored by NIMASA will be strengthened to intensify engagement with reputable shipping companies to achieve even higher output.

“At the moment, there are over 7,000 seafarers on the Nigerian Seafarers Register and we are committed to achieving more.

“We are concerned about the Seafarers Workforce Report which warns that there could be a shortfall in officers by the year 2026. To bridge the resource Gap in seafaring, there is the need to actively promote careers at sea and enhance maritime education and training to enhance the diverse skills needed for a greener and more digitally connected maritime industry,” Amaechi said.

In her goodwill message the Permanent Secretary, Ministry of Transportation, Dr. Magdalene Ajani noted that maritime day is usually used to focus attention on the importance of Shipping, Safety, Maritime Security, and Protection of the Marine environment as well as to emphasize a particular aspect of the work of the International Maritime Organization

She expressed optimism that recommendations that would be given by experts that have been selected to present result-oriented lectures as part of the event, would be looked into and adopted by the Federal government in relation to the welfare of the seafarers.

“The theme for this year’s World Maritime Day celebration “Seafarers: at the core of shipping future” seeks to increase the visibility of seafarers by drawing attention to the invaluable roles they play now and continue to play in the future.

“It is worthy to note that the shipping industry is the most efficient mode of transportation facilitated by the efforts of seafarers without which the world’s economy would not be able to function appropriately and that are why the Seafarers are our center of focus today.

Speaking also, the Director General NIMASA, Dr. Bashir Jamoh applauded the seafarers, stating that if there is anything that COVID-19 has confirmed, it is that seafarers are the true champions of humanity.

He questioned what would the world would have been without seafarers, he described the seafarers as the heart of the nation.

He assured that NIMASA on its part will continued to march in lockstep with the IMO on all matters concerning seafarers, he informed that since the outbreak of COVID-19. NIMASA were the first in declaring Seafarers as essential workers, while also stating that NIMASA is the first in the Continent to issue Marine Notice regarding Crew Change.

He said “Seafarers have always been the heart of shipping. And in my view seafarers will no doubt continue to remain at the Core of Shipping from past to present to future in line with this year’s theme of World Maritime Day.

“Today, as we join the rest of the world to mark World Maritime Day we salute the International Maritime Organization for keeping these brave men and women of the seas at the top of the global maritime agenda reminding all of us that we are nothing without them; we will ever be indebted to them for their sacrifices and contributions.

“NIMASA on our part has continued to march in lockstep with the IMO on all matters concerning seafarers since the outbreak of COVID-19. We were the first in declaring Seafarers as Essential Workers; we were also the first in the Continent to issue Marine Notice regarding Crew Change. We recognized that the COVID-19 pandemic had placed extraordinary demands on seafarers, with hundreds of thousands of men and women stranded on ships for months beyond their original contracts, unable to be repatriated due to national travel restrictions.

“A similar number of seafarers were unable to join ships and earn a living. This crew change crisis was becoming a humanitarian emergency that threatened the safety of shipping, so we as a Maritime Administration acted accordingly.

“The World Maritime theme also put the spotlight on other issues related to the human element of shipping, including the safety and security of life on board ships, seafarers’ well-being, and the importance of ensuring an appropriately trained and qualified workforce, ready to meet the challenges and opportunities of digitalization and automation.

“The efforts of the agency in securing our maritime domain, especially with the Deep Blue Project and the SPOMO Act, are yielding results with the recently released IMB report for the 2nd Quarter of 2021 showing a drastic decline in incidences of attacks on our waters and in the Gulf of Guinea. Seafarers can do their jobs without fear of being attacked or kidnapped.

“Also is the recent official flag-off of the National wrecks removal exercise with the first phase along Badagry creeks from Tin-can Island to Navy town, is geared towards making our waterways safe and navigable for seafarers and vessels.

“Our role as a regulatory agency is to ensure that Nigerian Seafarers are treated fairly by the Ship-owners and employers through the implementation of approved conditions of service and agreed-on collective bargaining agreements. We shall continue to pay priority attention to the capacity development and employment of seafarers.

The agency has also initiated the Seafarers Identity Document (SID) registration portal, and other e-platforms for Dockworkers, and their Employers to ease the verification and registration process in line with international best practices while stakeholders have already been sensitized for its smooth take off.” he said.

Speaking also, the President, Maritime Workers Union of Nigeria (MWUN); Prince Adewale Adeyanju who was represented by his Deputy, Comrade Tonye Harry appreciated the immense contribution of the seafarers in moving the national economy via the country’s waterways despite the dangers that are associated with them.

Harry also advised the federal government to prioritize the training of the seamen in order for them to manage shipping and other related businesses.

“Passenger shipping is an important part of domestic transport between littoral states with creeks and tributaries, and along coasts and rivers. Evidently, there are many navigable waterways in our nation’s water body through which large amounts of cargo and passengers are transported, marine personnel mostly seafarers’ man the numerous small craft and ferries; and by this deed perform an immensely important task in the national economy. This same scenario applies to the rapid growth being experienced in the cruise industry which is fast developing into a profitable leisure industry.

“My submission is that if we must develop as a Maritime Nation, we must appreciate the necessity to train and support a crop of national seafarers to man ships and in time filter to the broader shipping industry to help manage shipping and related businesses.

“Seafarers’ services broaden and give greater depth to the shipping industry. They are important assets because of their close links with trade and the promotion of export-oriented manufacturing industries . he said

On his part President, Nigerian Association of Master Mariners (NAMM), Captain Tajudeen Alao decried the unemployment that stiill ravage the seafarers despite the fact that they have received training and graduated from Maritime Academy of Nigeria, Oron, Akwa Ibom that operates on International Maritime Organization (IMO) Course Model. .

He also charged the federal government to disburse the Cabotage Vessel Financing Fund (CVFF) for indigenous ship owners who are the supposed owners of the funds adding that the initiative was not from the government but private individuals.