On World Oceans Day, stakeholders have called for an end to indiscriminate dumping of plastics into the nation’s water bodies. 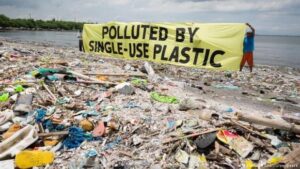 The experts made called for deliberate policies and actions to protect the nations water bodies in an interview.

According to them, another worrisome trend is the littering of water bodies with used face masks, saying there was need for concerted efforts to manage the impact of COVID-19 in the environment.

Describing disposable face masks as the next plastic problem, Mr Sylvester Arogundade, Earth and Environment Initiative, noted that if not disposed of for recycling correctly, they may end up in the environment, freshwater systems and the oceans.

He said it was worrisome that countries had no data to ascertain the amount of disposable face masks in the environment.

He noted that if not curtailed effectively, these plastics could release harmful chemical and biological substances indirectly to plants, animals and humans.

The expert said these disposable face masks, made from polypropylene could take no fewer than 450 years to decompose, if found on the environment indiscriminately, calling for adoption of reusable cloth masks.

He called for the setting up of ‘mask-only’ trash cans for collection and safe disposal of used masks in public places.

“We are calling for standardisation, guidelines and strict implementation of waste management laws for face masks.

“We also call for Nigeria to replace disposable masks with reusable face masks like cotton masks, we should begin to consider the development of biodegradable disposal masks’’.

Dr Ibrahim Choji, Chairman, Board of Trustees, Climate and Sustainable Development Network (CSDevNet), called on the Federal Government to go beyond rhetoric and set in motion the process of banning single-use plastic in Nigeria.

According to him, while plastic has many valuable uses, Nigeria has become over-reliant on single-use or disposable plastic with severe environmental consequences.

“CSDevNet recognises that beating plastic pollution is a huge challenge especially when we consider the perverse culture of current disposable economy.

“Dumping plastic bottles, bags and cups after a single use is projected to result in our oceans holding more litter than fish by 2050, while an estimated 99 percent of all seabirds will have ingested plastic.

“We need fish, not plastics, the Federal Government has a major role to play in beating plastic pollution and particularly addressing the current scourge of plastic waste on urban and rural landscapes across Nigeria.

“We believe Nigeria can toe this line by providing incentives such as tax breaks for companies to encourage recycling as well as to transform their production processes towards the production of biodegradable alternatives.

“The country can also strictly enforce legislation as part of a holistic programme for sustainably transforming their economy and banning all non-biodegradable plastics from the country”.

Choji added that the organisation in partnership with Federal Ministry of Environment and Oxfam Nigeria, was engaging National Stakeholders with review on Climate Resilience focusing on policy issues around Wetlands conservation.

This, he noted would improve governance of Climate Change adaptation and mitigation responses with stronger wetland policy alignment.

He said it would also improve action plans with realistic short, medium and long-term plans for achievement of the Government’s goals on wetland conservation in Nigeria and Development of indicators for effective tracking of progress

According to the International Union for the Conservation of Nature, (IUCN) at least eight million tonnes of plastic ends up in the ocean’s every year.

World Oceans Day reminds every one of the major role the oceans have in everyday life.

They are the lungs of our Planet and a major source of food and medicine and a critical part of the biosphere.

The purpose of the Day is to inform the public of the impact of human actions on the ocean, develop a worldwide movement of citizens for the ocean.

It is also to mobilise and unite the world’s population on a project for the sustainable management of the world’s oceans.