The insurers of the X-Press Pearl have made an initial payment of $3.6 million to the Sri Lankan government to help compensate for the ship’s fire and sinking, the ship’s operator said in an update. 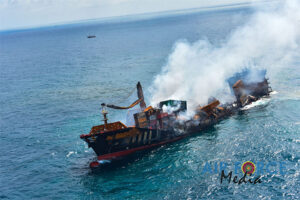 Discussions are ongoing related to the payment of further claims and all legitimate claims will be considered, X-Press Feeders said, while also providing an update on the environmental response.

“We continue to contribute to the cleanup and pollution mitigation efforts, having flown in additional oil spill response assets on a chartered flight from Malaysia in response to a request from the UN-EU team in Colombo.

“At the wreck site, caretaker salvors remain on a 24-hour watch to deal with any debris and report any form of a spill with drones deployed daily to help with the monitoring activities. Representatives of ITOPF and Oil Spill Response continue to monitor updates from the scene and are ready to respond immediately, if required.”

The Singapore-registered X-Press Pearl reported smoke in a cargo hold after it arrived at a Colombo anchorage on May 20th carrying 1486 containers, including 81 Dangerous Goods Containers and 25 tonnes of Nitric Acid.

Despite fire-fighting efforts, the fire eventually engulfed the entire vessel and the X-Press Pearl sank as salvors were attempting to tow it to deeper waters.

In the aftermath of the fire, it was revealed that a of the container with nitric acid was discovered to be leaking prior to the ship’s arrival in Sri Lanka. While the X-Press Pearl called Hamad Port in Qatar and Hazira Port in India for discharge and loading operations, they were unable to offload the leaking container as the ports lacked the specialized facilities and expertise to handle the situation.

The fire and sinking has set off the worst environmental disaster in Sri Lankan history. Earlier this month, a Sri Lankan court heard of hundreds of dead turtles and other animals that have been discovered in the aftermath of the incident.

The ship’s Russian captain is one of more than a dozen people that the Sri Lankan government has co-accused in relation to the wreck. Although the captain has not been formally charged, he is prohibited from leaving the country as the investigation into the incident continues.

The latest update from X-Press Feeders included an update on the rest of the crew:

“Our seafarers remain housed at a hotel in Colombo, awaiting permission to travel back to their anxious families and loved ones. Having endured the trauma and stress of the fire on board and an evacuation that caused injuries to their ranks, they have now been in lockdown for over six weeks. We are working closely with [Sri Lankan] authorities through our local lawyers with regard to crew’s repatriation as soon as possible,” the update said.