Financial sums lost through ransoms are a small share of the total costs suffered by African nations in the world’s maritime piracy hotspot.

Piracy costs African countries in the Gulf of Guinea over $500 million annually in what is currently the world’s maritime piracy hotspot. 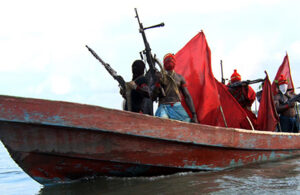 With several attacks and kidnappings each year, much of that cost is tied not to the value of stolen ships or cargo but related to anti-piracy measures, according to a study by Stable Seas, a transnational maritime security research organisation.

“For every $1 pirates steal or extort from African victims, Gulf of Guinea governments spend around $524 on counter-piracy efforts,” the report says.

Meanwhile, piracy gains are considerably lower, estimated at only about $5 million a year. The vast majority – $4 million – comes from ransoms paid by non-African entities seeking the release of non-African hostages.

Oil theft was a lucrative business model that netted pirates up to $25 million a year in the early 2010s, but far more difficult to pull off versus the swift raids being conducted now.

“Direct losses due to ransoms paid for local hostages and the value of goods and oil stolen at sea probably sum to $1 million to $1.2 million per year,” the study said. “This number is significantly lower than it was a decade ago when oil theft at sea was more common and a greater share of hostages taken by kidnappers were West and Central Africans.”

“These low direct costs to African nations have created the perception among some that Gulf of Guinea piracy and armed robbery are greater problems for international shipping companies and foreign seafarers than they are for African nations,” Stable Seas noted.

But the perspective that Gulf of Guinea nations are not the primary victims is misguided, given that piracy and armed robbery’s direct monetary costs are low compared to much higher costs of counter-piracy operations, increased security measures, and indirect financial losses psychological tolls suffered by seafarers and fishers.

“For every $1 pirates take from Africans, Gulf of Guinea nations are robbed of around $170 in port fees lost due to decreased shipping activity and another $1,2000 in lost import tariffs,” the organisation says.

Stable Seas concludes that lost government revenue, which totals an estimated $1.4 billion per year, is as much as double the best estimates of the direct costs of piracy paid by international navies, intergovernmental organisations, and the global marine transportation private sector each year.

The Gulf of Guinea borders 20 countries and is a key route for everything from steel to soda in a region that relies heavily on imports.

The report estimated the piracy costs of twelve nations, specifically the area that stretches from Cote D’Ivoire in the northwest to Angola in the southeast. This area accounted for 95 percent of the region’s piracy and armed robbery incidents over the last three years and 93 percent of all Gulf incidents since 2010.

For three consecutive years, the Gulf of Guinea has been the world’s most dangerous shipping route. More than half of attacks at sea globally happen in a maritime territory that spans 2.5 million square kilometers.

However, the trend in 2021 has been promising, as piracy rates have shown an 80 percent decline during the first half of the year compared to last year, according to IMB data.

The threat has mobilised various responses from governments. Nigeria for example, has initiated large-scale anti-piracy surveillance programs such as the Falcon Eye project, an Israeli-designed maritime domain awareness system manufactured by the UAE.

Nigeria’s Deep Blue project, a $195 million investment towards vessels, maritime domain awareness platforms, and land and sea assets, is the most significant commitment by any Gulf of Guinea country to date.

A decade ago, Somalia and the Horn of Africa was a global piracy hub. That has largely been mitigated thanks to years of international coordination and multilateral action.