The resumption of services along the Abuja-Kaduna rail corridor on Monday witnessed a low passenger turnout, the News Agency of Nigeria (NAN) reports in Abuja. 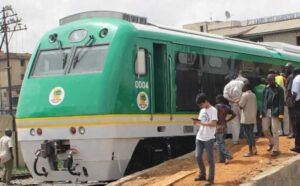 Some passengers who boarded the train, however, told newsmen that they were happy the train service had finally resumed.

A passenger, Hajia Aisha Gubir, said,” I used to be regular on this Abuja-Kaduna rail transport.

“I was extremely excited when I learnt they were going to start the programme today so much so that I was the first to arrive at the station.

“And ordinarily, I would expect the transport team to grant me a business class rather than the economy ticket I bought for being brave and the first to board the train today.

“I am so happy about it because hitherto the roads have been so bad but we still ply it with faith.”

On low turnout of passengers, Gubir said it could be due to the fact that most people were scared or not aware of the resumption of service.

“Initially you will expect people to be scared and maybe people are not aware. In due course, I think people will begin to use it,” she said.

On the use of mobile app, she said with her NIN, there was no problem buying her ticket online.

On the increased fair, Gubir said it was expected and she did not have a problem with it.

Another passenger, Mr Yunana John who also said he was comfortable with the increased fair however lamented about some bottlenecks in buying ticket online.

John said: “I think the ticketing is OK although there are some small issues regarding the NIN.

“I registered the app with my Glo line but my NIN is with my MTN. Now, I cannot even update because of the difference, so I had to come buy it here and I’m sure some other passengers have similar issues.

“I am comfortable with the fare and I can understand that things have gone up, so it is expected. I think I do not have any problem, I’m satisfied with it.”

Another passenger, who spoke on condition of anonymity, said: “Actually purchasing the ticket was a great experience; I did not have any problem.

“I was on my way to Kaduna when I learnt the train is back and so I decided to come and buy the ticket. I am not afraid of using the train at all,” he said.

On the security Osinowo said: “A lot has been done in terms of security which cannot be disclosed except to say that right now the service has eyes and ears throughout the entire corridor.

On increased fare, he said it was due to increased cost of running the service.

Osinowo said the low influx of passengers was expected as the service just resumed after several months.

He said that the corporation would also increase its service in due time after ensuring all that was put in place was functioning as expected.

“We are just opening after a long time, putting in a lot of security and operating system, technology and all that.

“We need to be comfortable running the system and ensure the system in place is working well to protect lives and properties of passengers, so it’s a gradual thing.

“It will take some time to ramp up but by Christmas when passenger influx is expected to increase, we hope to increase our services,” Osinowo said.