The Minister of Niger Delta Affairs; Senator Godswill Akpabio and the Minister of State for Transportation, Senator Gbemisola Saraki will on Thursday this week lead maritime stakeholders and industry experts to the 3rd edition of the African Marine Environment Sustainable Initiative (AFMESI). 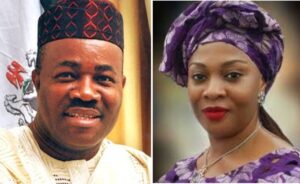 According to a press release signed by the Organising Committee, Godswill Akpabio will be the Chairman of the Day, while Saraki will be the keynote speaker in the event which holds in Lagos on October 7th, 2021.

The event themed: “African Blue World: Which Way To Go?” has the Chairman, House Committee on Maritime and Education, Linda Ikpeazu as the Special Guest of Honour; the Director General of the Nigerian Maritime Administration and Safety Agency (NIMASA), Dr. Bashir Jamoh as the Chief Host; and the Chairman of Starz Group, Engr. Greg Ogbeifun is slated as a Guest of Honour.

According to the Founder of AFMESI, Dr. Felicia Chinwe Mogo, the one-day event would feature several pertinent maritime topics such as; Impact Of Security And Piracy in Maritime Business; Integrated Ocean Management, Science And Governance; Ocean Science And Governance In Marine Environment; Accounting For The Values And Wealth Of The Maritime; and Africa’s position within various ocean-related international laws (int’l).

In its previous annual conferences, AFMESI, a non-profit organization, availed the maritime sector robust platforms for holistic deliberations on sustainable approaches in managing the nation’s marine environment for optimum value.

You will recall that at the last event the Nigerian government and other African nations were urged to address the menace of plastic pollution on the marine environment from the producing companies.

As a veteran, she has been a member of Nigeria’s delegation to the International Maritime Organization (IMO) and United Nations meetings, which has given her immense visibility that has earned the country recognition.She had chaired sessions at IMO, developed four IMO documents to the credit of Nigeria and was a Member of United Nations Group of Experts on scientific aspects of marine Environment Protection (GESAMP).

She currently secured the Chair of the correspondence group on marine litter management of the scientific groups meetings on London convention and protocol of IMO for Nigeria. She is a negotiation team member of Abidjan Convention Secretariat on the Management of Coastal and Marine Environment of the Regional Seas of West and Central African for the Region.