Although shipping losses have more than halved over the past decade, fires on board vessels remain among the biggest safety issues for the maritime industry, according to a new analysis by Allianz. The global corporate insurance carrier analyzed over 240,000 marine insurance industry claims over the past five years costing over $9 billion reporting that the danger of fires is increasing and already the most expensive cause of loss, accounting for 18 percent of the value of all claims. 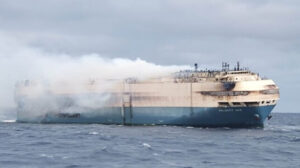 In a new safety bulletin, Allianz Global Corporate & Specialty reports that the number of fires on board large vessels has increased significantly in recent years. Across all vessel types and causes, fire/explosion was the second top cause of the 54 total losses reported in 2021 accounting for eight of the losses. Fires were second with only vessels that foundered, 12 vessels were lost in 2021. Further, over the past decade, fire ranks as the third top cause of loss overall, accounting for 120 out of a reported 892 total losses. Again, only foundered (465) or wrecked/stranded vessels (164), accounted for more claims.

In 2021, fire was the third top cause of shipping incidents overall around the globe – behind machinery damage (1,311) and collision (222). There have been 41 total losses involving ro-ros over the past decade with fires causing six losses. Among the specific incidents, they highlight the February 2022 fire and subsequent sinking of the ro-ro Felicity Ace, the June 2020 fire on the car carrier Höegh Xiamen, and the January 2020 fire on the containership Cosco Pacific. The common denominator in all the fires, as well as specific instances of container fires, was the presence of lithium-ion batteries.

“AGCS has long warned about the potential dangers that lithium-ion batteries can pose for the shipping and wider logistics industries, whether they are being transported inside electric vehicles or as standalone cargo, if they are not handled, stored, or transported correctly, with fire being a significant hazard,” said Captain Rahul Khanna, Global Head of Marine Risk Consulting, AGCS. “Batteries are not only a potential cause of fire if damaged, overcharged or subjected to high temperatures, they can also aggravate other causes of fire at sea and are difficult to extinguish as they have the potential to reignite days or even weeks later.”

Allianz highlights four main hazards involving the transportation of these batteries, including fire, explosion, toxic gases, and the potential for thermal runaway (a rapid self-heating fire that can cause an explosion), and is considered a likely element in the loss of the Felicity Ace this year. In most shipboard incidents, Allianz warns that a thermal runaway event can be a significant possibility unless immediate action is taken by the crew, such as suppressing a fire with copious amounts of water over a long period of time. However, this can be extremely challenging due to factors such as early detection being difficult, a shortage of crew members, and a lack of adequate firefighting capabilities on board.

The bulletin identifies the most common causes of the fire hazard as being substandard manufacturing of battery cells/devices; over-charging of the battery cells; over-temperature by short-circuiting, and damaged battery cells or devices, which, among other causes, can result from poor packing and handling or cargo shift in rough seas if not adequately secured.

Ro-ro and car carrier vessels they point out can be more exposed to fire and?stability issues than other vessels. To facilitate the transport of automobiles and other vehicles, the internal spaces are not divided into separate sections like other cargo ships. The lack of internal bulkheads can have an adverse impact on fire safety and a small fire on one vehicle or battery can grow out of control very quickly. Vehicles are not easily accessible once loading has been completed. The large volume of air inside the open cargo decks provides a ready supply of oxygen in case of fire.

“Safe carriage has become an emerging risk concern for the shipping community, raising questions about the adequacy of fire detection and firefighting capabilities on board vessels, cargo loading procedures, and even whether changes in vessel design may be necessary, given specialist equipment is required to extinguish any blazes,” says Khanna.

Allianz recommends that the primary focus must be on loss prevention, focusing on storage and in transit. They are calling for training to ensure staff is trained to follow correct packing and handling procedures and that seafarers have had Li-ion battery firefighting training. It is critical they said to check all EVs are properly secured to prevent any shifting during transportation. They also recommend checking whether the EVs have an undamaged battery system and ensuring there is no charging during the voyage In transit, anything that can aid early detection is critical, including watchkeeping/fire rounds and utilizing thermal scanners, gas detectors, heat/smoke detectors, and CCTV cameras.

“If the maritime industry is to improve its incident record related to the transportation of lithium-ion batteries all parties involved in the supply chain must understand the hazards involved, the most common causes, and the problems associated with transporting in commerce,” says Captain Randall Lund, Senior Marine Risk Consultant at AGCS, and one of the authors of the report. “Regulations and guidance are specific in addressing these batteries to help prevent most incidents, but these can only be effective if they are communicated and enforced.”