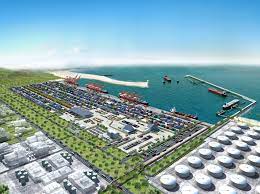 Before the idea of the Lekki Deep Seaport, which is now nearing completion, Apapa has always enjoyed the glory of being the biggest port in Nigeria.

But, the expansive and more modern Lekki Deep Seaport located at the eastern flank of Lagos state is about to take the glory.

Lekki deep sea port is being built over a 90hectare of land at the centre of the Lagos Free Trade Zone, approximately 60km east of Lagos. It is the first of that kind of port to be built in Nigeria.

Available statistics are that, it has three container terminal with capacity for 2.7 million TEU, three liquid berths with capacity for 45,000DWT. It also has dry bulk terminal of Four million metric ton a year. The deep seaport will allow 18,000 TEU capacity vessels.

We are also told that, it has a 9km-long and 19m-deep navigation channel and that, a 600m-wide turning basin will be built to allow vessels to approach or leave the port. Its owners also advertised that, a 500m breakwater structure and a 300m secondary breakwater structure will be constructed for safe handling of vessels.

But, actual construction of the deep sea port began in December 2017. And we have been told that operations will commence at the port in September this year.

The port is a joint venture between Tolaram Group (75%), Lagos State Government (20%), and the Nigerian Ports Authority (5%).

The port will be operated by CMA CGM Group which signed a Memorandum of Agreement with its owners in April 2018 to operate the Lekki port container terminal.

Going by the Minister of Transportation; Mr Rotimi Amaechi’s assurances, the Lekki port will be operational by September 2022. But, apart from the doubts about that date, there are some fears that stakeholders have expressed. This include: security and traffic congestion.

Not too long ago, there was a security breach at the neighbouring Dangote Refinery. The infraction was reportedly perpetrated by residents of the riverside community within the axis. No doubt, this is a threat to facilities and persons at the Lekki port as well This also portend threats to ships sailing into and leaving Lekki Deep Seaport.

Aside from the numerous boostr to the Nigerian economy, perhaps, the greatest fear currently being expressed is that of the impending traffic gridlock that the Lekki port will foist on all those who either live in that axis or have to drive through or even work there.

Read Also:  What are your fears towards the operation of the Lekki Deep Sea Port?

A foretaste of what is to happen has been given by a body known as the Nigeria Economic Zones Association, which last week expressed concern over the increased movement of oil tankers in the Lekki axis of Lagos State. This was after an oil and gas firm commenced operations. According to the association, the Free Trade Zone where the Lekki port and other high net worth businesses are coming up, has no truck and tanker parks. To the best of our knowledge, the Lekki Deep Seaport does not have a truck transit park yet.

According to the Nigeria Economic Zones Association, “this situation, if not tackled early enough, will render the whole axis not conducive for businesses, and this will negatively affect the country’s drive for economic development through the Free Trade Zone scheme.”

Sadly, there is yet no rail link to the port. Which means that, all cargoes will be evacuated by road. Our worry about traffic in and around Lekki once the port becomes operational is informed by what is presently happening in Apapa on account of the trucks that come to either load cargoes or to drop empty containers for export.

Another major challenge ahead of the imminent take-off of the port, is the access road. The long stretch of road leading to the port is far from being completed.

So we ask: How smooth will Lekki port operations be, when the road leading to the facility is far from being completed, and there is no truck park.