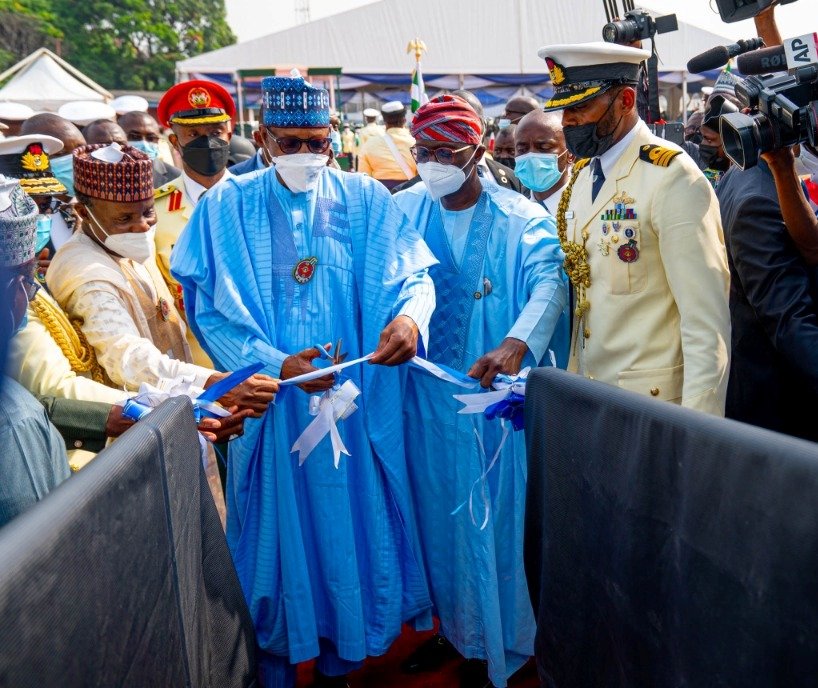 The indigenously constructed SDB, NNS Oji, is the third in its series to be locally-built at the Naval Dockyard Limited, Lagos, solely by Naval engineers following the successes recorded in the building of NNS Adoni and NNS Karaduwa, inaugurated in 2016 by President Buhari.

Speaking at the event, which also marked the inauguration of some recently acquired platforms and the keel-laying ceremony for the construction of Boat-IV and Boat-V, President Buhari said the new inductions to the Naval fleet would boost their capabilities in securing Nigeria’s maritime domain.

Mr Femi Adesina, the president’s media aide, quoted the president as charging all naval personnel to maintain professionalism and ensure good use of the newly built and recently acquired platforms that include: NNS LANA, KANO, IKENNE, ABA, SOKOTO and OSUN.

‘‘We should note that we are in a critical period where our country is faced with a serious decline in our revenue and the security challenges we are facing.

‘‘I wish to reiterate that despite these challenges, our administration is very determined to ensure that the Navy is well supported to achieve its statutory responsibilities.

‘‘Let me assure you that the Government will continue to support the ideals of the Nigerian Navy in the performance of its constitutional duties.

The president also commended the Nigerian Navy for maintaining a steady course in its drive for local content development which he said was in tandem with the philosophy of his administration.

He said that Federal Government’s commitment to properly equip the Navy with the right mix of platforms had seen the Service take delivery of NNS LANA in May this year from France.

‘‘I commend the business dependability of Messrs OCEA Shipyard – France, the builders of our Navy’s first-ever purpose-built Offshore Survey Vessel for a conclusive and successful execution of the contract.

He maintained that the Federal Government was aware of the Navy’s dedication toward ensuring the security of the vast oil and gas industry in the nation’s maritime environment as well as sea lanes of communications.

According to him, given the present high dependence on oil and gas revenues, the Navy is undeniably a major contributor to the economic well-being of Nigeria.

‘‘Arrests of those involved in illegalities have yielded results as some pirates, illegal bunkering syndicates, pipeline vandals and other miscreants have been convicted during this year.

‘‘Such successes were made possible through the enforcement of our new anti-piracy law on Suppression of Piracy and Other Maritime Offences Act 2019.

‘‘Furthermore, the provision of the new policy directives by the current administration of the Navy codified in such documents as the Nigerian Navy Strategic Plan 2021-2030; the Chief of the Naval Staff Strategic Directive 2021-5 and the Total Spectrum Maritime Strategy have given the Service credible guidelines and leverage for improved operational efficiency,’’ he said.

The Commander-in-Chief also used the occasion to laud the efforts of the Navy in the fight against maritime crimes in the Gulf of Guinea region, praising the Chief of Naval Staff, Vice Admiral Awwal Gambo, and all the officers, ratings and civilian staff of the Navy for remarkable achievements.