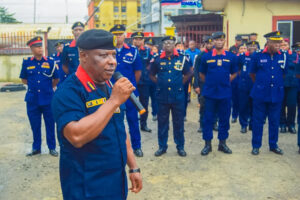 NSCDC Commandant in Rivers, Micheal Ogar gave the warning when he addressed officers of the command, according to a statement by the command’s Spokesman, DSC Olufemi Ayodele in Port Harcourt on Tuesday.

He said the defence corps would not tolerate any act capable of denigrating the image and integrity of the corps.

“We must justify the existence of the corps by our unwavering commitment and loyalty to NSCDC mandate as acts of indiscipline, compromise, and connivance with economic saboteurs will not go unpunished.

“The command will continue to fight against oil theft and illegal dealings in petroleum products relentlessly, especially as the new anti-vandal unit has been reconstituted for efficiency and effective service delivery.’’

Ogar said it would be wrong for any officer to engage in any illicit activity, especially as welfare of personnel had improved under the current leadership.

“So, NSCDC Commandant-General, Ahmed Audi has reiterated his commitment to the overall welfare of all officers and men through training and re-training, timely payment of salaries and benefits and promotion.

“We must also take intelligence gathering seriously if we must achieve meaningful results being the fulcrum and bedrock of security agencies.

“To achieve commendable results, personnel must also maintain cordial relationships with both civilians and other security agencies in their deployed areas because security is a collective responsibility,’’ he said.

The commandant urged members of the public to report the activities of illegal bunkers and other criminal activities to the command, assuring that their identity would be kept secret.