The Belledune Port Authority, which runs Port Belledune in New Brunswick, Canada, has partnered up with Cross River Infrastructure Partners, a US-based development company for using “advanced Small Modular Reactor” (aSMR) technology in a future expansion of the port. 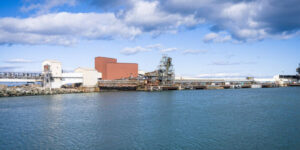 The Green Energy Hub, which is a district within the port land that is intended for clean energy and low-emission projects, will receive the power produced by this reactor. The aSMR technology is being provided by ARC Clean Technology Canada and will be used to establish an ARC-100 unit. This unit will be able to generate a minimum of 1GW of zero-emission heat and power for industrial uses. The reactor will serve as an energy source for the production of hydrogen and other industrial applications at the port.

The project is still in the planning phases and there is a lot that still needs to be done, such as carrying out feasibility studies, obtaining environmental approvals, and licensing from the Canadian Nuclear Safety Commission. Project developers, Cross River and ARC have scheduled information sessions to keep the stakeholders and the local communities in the loop before and during the approval process. The project is expected to reach commercial operation sometime between 2030 and 2035.