China’s Hudong Zhonghua Shipbuilding, a division of CSSC, floated Evergreen Line’s newest containership which is being called the world’s largest containership based on rated capacity. The new ship, named Ever Alot, is the same dimensions as the previous class of ultra-large containerships built by Samsung, but features a design developed by the Chinese shipbuilder and will have a rated capacity of 24,004 TEU compared to the 23,992 of the Ever Ace introduced in the summer of 2021. 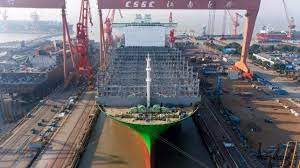 The order for the vessel was initially placed in November 2019 with CSSC calling for four ships and expanded in June 2021 to the current six ships. Hudong Zhonghua was assigned the task of designing the vessels and building the lead ship of the class.

The vessels were designed using the latest green principles to maximize efficiency. Built following TIER III specifications, the vessels will reportedly be high efficiency and energy saving. Employing Hudong’s bulbous bow design, large-diameter propellers, and energy-saving ducts, the ship will have advantages of speed and low energy consumption. They are also being outfitted with hybrid scrubber desulfurization devices.

Like the other vessels of the A-class, the newer Ever Alot will measure 1,312 feet in length with a 202-foot beam. The total height will be 109 feet. The Ever Ace is 241,960 dwt and the new vessel is expected to have a similar tonnage.

Read Also:  $500 Million Spent Annually To Keep Piracy At Bay In The Gulf Of Guinea

In order to be able to build these new vessels and maintain semi-tandem construction to deliver a new ship every two months, Hudong Zhonghua took over the operations of Changxing Shipbuilding’s number one dry dock. The dry dock was lengthened from 1,700 feet to 2,165 feet in 2020. The yard now reports that it has an annual production capacity to build five to six ultra-large containerships. They said that Dock 1 “has become the busiest specialized production facility for large containerships in China.”

The new vessel is part of an overall expansion and modernization of Evergreen’s operations. Alphaliner currently reports that the company has the largest order book based on the number of vessels of the large carriers, and second in capacity to MSC’s orderbook. Evergreen has a total of 607,402 TEU on order. In addition to the ultra-large vessels, Evergreen this year ordered 24 feeder vessels with a capacity between 1,800 and 3,000 TEU from CSSC. That order followed 20 boxships each with a 15,000 TEU capacity ordered from Samsung Heavy Industries. According to Evergreen, the goal is to establish one of the youngest, most technically advanced, and sustainable containership fleets.