Ghanaian fisheries observers now fear for their lives as they get offers of bribes, as well as threats from Chinese-owned trawl fleets operating in Ghana’s waters, for favourable reporting according to an Environmental Justice Foundation (EJF) report. 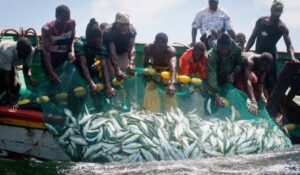 Due to the threats from the Chinese fishing boats, they end up altering their observatory reports to avoid harms way.

“The water I drink, the food I eat, even where I sleep, I am always very, very careful,” one Ghanaian observer is reported as saying.

EJF reports that there is a climate of fear among observers, not least since one of their members, Emmanuel Essien, went missing at sea in July 2019 from the Chinese-owned vessel, named, Meng Xin 15. His fellow observers do not believe that he had simply fallen overboard.

“We fear a lot. Even something like taking a picture and the captain sees you,” another observer stated.

“One time such thing happened to me. I had to tell him that I am not feeling well and asked to join a passing vessel. He became aware and he went further out to sea where I would not be able to make a call.”

Interviewees reported violent incidents such as a skipper threatening an observer with a metal bar when he was found trying to preserve evidence of illegal fishing.

In another case an observer was threatened with a knife when he tried to prevent juvenile fish from being dumped at sea.

EJF states that saiko, the illegal practice of targeting small pelagics, had taken place on board the vessel in which Essien was boarded prior to his disappearance. He had claimed that fishing for under-sized fish and illegal trans-shipment were taking place.

In his report, Essien had written “I humbly plead with the police to investigate further.”

Earlier this year Ghana became the second country ever to be given an EU second yellow card, a formal warning over illegal fishing that could lead to a seafood export ban to the EU. Ghana’s laws had been substantially improved after its initial yellow card in 2013, but there has been a systematic failure to implement these policies or to pursue prosecutions for infringements.

“We are raising issues. There is no difference at all. Up till now absolutely nothing has been done,” said one Ghanaian observer.

Despite a statement made by the government of Ghana in November 2019 pledging to put an end to saiko, monitoring at Elmina port by EJF shows that it continues unchecked, with over 1300 such landings having taken place since the announcement was made. Observers have also confirmed that saiko continues.

“The failure of the Ghanaian government to crack down on the lawlessness and illegal fishing has meant that these fisheries observers are putting themselves in physical danger to report illegal fishing and even then no action is taken. Ghanaian authorities need to act urgently, with determination, ending the threats and bribery and bringing wage structures under government control,” said Environmental Justice Foundation’s CEO Steve Trent.

“Urgent reforms are required to ensure the security of fisheries observers and end illegal practices in the trawl fleet.”