Clearing agents at the Lagos ports have revealed several irregularities associated with cargo declaration and concealment at the ports. This is even as they alleged that some clearing agents and importers collude with some corrupt officials of the Nigeria Customs Service (NCS) to short-change the federal government. 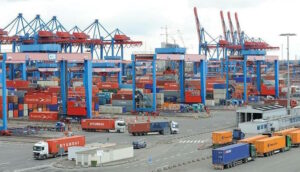 Enquiries by our correspondent showed that many importers choose to conceal some goods and under-declare their consignments in order to cut corners and evade payment of correct duty to be charged on such cargo.

Some clearing agents who spoke with our correspondent last week confirmed this, noting that importers indulge in these illegalities in order to remain in business due to the harsh and unfriendly cost of importation.

They affirmed that some officers of the Nigeria Customs Service are also accomplices, even as they confirm that importers through their clearing agents do bribe the Customs personnel at the seaports.

In a chat last week with a clearing agent and Tin Can Chapter Public Relations Officer of the African Association of Professional Freight Forwarders of Nigeria (APFFLON), Mr Clinton Okoro, he decried that despite the process of cargo scanning at the ports, Customs officers still make under-declaration possible, because of their love for human interface where they demand for bribe from agents and importers.

According to him, agents are expected to clear their consignments through technology from the confines of their office without necessarily having any interface with the Customs.

Okoro alleged that the majority of the overtime cargoes in the port are there because of some of these irregularities. He also informed that the electronic Manifest that contains the Bill of Laden history can help to detect concealment and under-declaration from the port of origin.

He said: “When you talk about undeclared goods, it shows that the importer is a dubious person. Sometimes the agents do consultations for importers like giving advice on how they would do their shipment and sometimes the Customs will now want to shift the blame on the agents that they are the one that will tell the importers not to manifest some goods. Scanning at the ports is a very genuine process, but the issue is still the human interface. The scanning process will have all containers scanned and the contents will be known and marked. If there is anything that is not declared, the scanning machine will point it out. The issue is just that the Nigeria Customs Service cannot do without these physical human interfaces. They like it because when you are invited for an examination they settle them and you see them keying what is in the document into the system. We are expected to stay in the confines of our office and clear our jobs but they don’t allow it.

“The issue of under-declaration is an offence in CEMA and can even cause the consignment to be seized. Anyone indulging in that is someone who don’t know what he is doing. It is an offence and I don’t think any professional agent or importer will want to do that, because it will cause delay. Today we have the eManifest in the system that is the Bill of Laden history. That is not from the agent or importer. It is from the Captain/Shippers. Immediately they get the containers they have to examine them to know what’s in them and that is what will be in the Bill of Laden history in the system of Customs. The people doing that are doing it in order to have an excess of what they import, but you won’t be looking for profit and then shoot yourself on the leg” Okoro stated.

However in his response, the National Public Relations Officer of the NCS, Deputy Comptroller Timi Bomodi told our correspondent that Customs has no business with cargo declaration, adding that declaration is the duty of the agent or importer.

Bomodi informed that the service only generates revenue from under-declaration through Demand Notices where importers who under-declare an item are compelled to pay the difference in the duty payable to the command as revenue. He also stressed that false declaration leads to actual seizure of the consignment.

He explained that, “following how our process works, declaration within the system happens in stages. So if you make a declaration to Customs and you make your payment, which is when Customs will now begin to look at the declaration. Customs has no business with declaration. The declaration is the duty of the agent or importer. So how does Custom collude with an importer to under declare?

“There is revenue discovered from situations like under declaration. People who under-declare an item are compelled to pay Demand Notices and these DNs form part of the revenue of each of these commands. There is nothing like under declaration of a good and the customs officer will give you a pass. As a matter of fact, false declaration leads to actual seizures. We see a lot of that in the system at many of the commands”, he concluded.

Debunking claims of the NCS, the factional interim President of the Association of Nigerian Licensed Customs Agents (ANLCA), Mr Pius Ujubuonu confirmed that there are some bad eggs in the Service who may be aware of some concealment in the cargo and choose to connive with the importer to under-declare the contents of the consignment.

He however charged the Nigeria Customs Service to review their laws and tighten every loophole where these irregularities are done in cargo declaration and clearance.

“In every 12, there must be a Judas and in every system there are few people who compromise either knowingly or unknowingly, either through ignorance or collusion. It is possible that such things happen, but I don’t think it is happening at a rate that will make it a character of Nigeria Customs. I am not saying it is not possible. If the law is ineffective, it should be reviewed and block the loopholes. No agents will come into the port and have infractions and take them out of the port without Customs knowing. It takes two to tango. If there are things like that, which means there is insider collusion”, Ujubuono said.

Also, a clearing agent who pleaded anonymity told our correspondent that importers and agents most times do not disclose or declare the entire content of their consignment in order to remain in business. He said this is because the concealed goods serve as the importers ‘profit’.