Over 20 countries including the US, Japan, Australia and Canada have signed the Clydebank Declaration to develop at least six green shipping corridors between two or more ports by 2025 and “many more” by 2030, the UK COP26 presidency said Nov. 10. 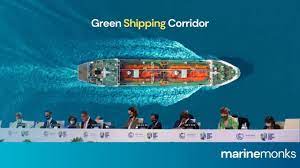 “It is our collective aim to support the establishment of at least six green corridors by the middle of this decade, while aiming to scale activity up in the following years, by inter alia supporting the establishment of more routes, longer routes and/or having more ships on the same routes,” the signatories said.

Corridors would arise from partnerships between willing ports and operators to decarbonize specific shared maritime routes, the declaration said.

Voluntary participation by operators was a significant element for successful green shipping corridors.

“For greater clarity, all vessels transiting a green corridor would not be required to be zero emissions or to participate in the partnerships,” it said.

Over 200 businesses across the shipping value chain had committed to scaling and commercializing zero emission vessels and fuels by 2030, COP26’s High Level Champion Nigel Topping said during a press conference.

“And on the demand side, Amazon, Ikea, Michelin, Unilever, Patagonia and many others have announced they will only buy zero carbon freight from 2040,” he said.

“Deep-sea vessels contribute around 85% of total maritime emissions and are the most difficult to decarbonize, due to large quantities of high energy-density-fuel usage and the long lifespan of the fleet, which, for example, is 20-25 years for an oil tanker,” said Anne Robba, manager, Future Energy Signposts, S&P Global Platts Analytics.

With electrification not seen as feasible, the choices for alternative shipping fuels are green methanol, liquid hydrogen and ammonia.