Home » COVID-19: Show Proof Of Vaccination Or Be Barred From Public Places – Obaseki

Gov. Godwin Obaseki of Edo has said that from the second week of September, anybody without proof of COVID-19 vaccination will be barred from public facilities and large gatherings. 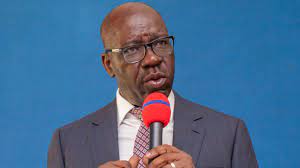 Obaseki, who made this known during the flag-off of the second phase of COVID-19 vaccination in Benin, said only those vaccinated would have access to pubic places and large gatherings.

He lamented the increasing cases of COVID-19 infections in the state, adding that government’s efforts were geared towards mitigating the spike in number of cases.

“With what we have seen so far, COVID-19 pandemic is here to stay. This is the third wave and there is nothing that points to the fact that other waves will not come.

“What we are likely to see is intermittent waves of this pandemic. We are not going to shut down Edo State but we will make sure we protect all Edo citizens.

“Therefore, I have come out with the following regulations, beginning from the second week of September 2021.

“Large gatherings as well as high traffic public and private places will only be accessed by persons who have proof of taking at least one dose of COVID-19 vaccine.

Read Also:  Determine The Sex Of Your Baby Right On Your Bed!

“Such people will not be allowed to worship in churches and mosques. There will be no access to banking halls and event centers without proof of vaccination at the gates,” Obaseki said.

Obaseki said that adequate arrangements had been made with security agencies to prevent anybody without a vaccination card from accessing any of the public places.

The governor said the state was aiming at vaccinating 60 per cent of its population within the next one year.

According to the governor, Edo has so far collected 6,306 samples out of which 203 cases have been confirmed while four persons have died from the third wave.