Home » Customs Says Scanners For 3 Ports To Arrive This Month

Customs Says Scanners For 3 Ports To Arrive This Month

The Zonal Coordinator of Customs, Zone A, ACG Modupe Aremu, on Thursday said that scanners to be deployed in three ports would arrive in the country this month. 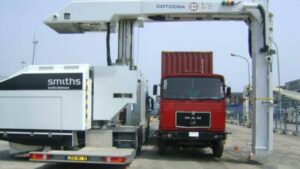 Aremu disclosed this during a working visit to some commands in Lagos.

Aremu said that the arrival and deployment of the scanners in Apapa, Tincan and Onne port would help strengthen the fight against smugglers.

“The scanner is a pictorial of everything that is in the container and that is why the scanner is very important and government is making efforts to see it come in.

“With e-customs, we are going to have over 70 scanners deployed to all seaports and airport,” she said.

The ACG commended the Apapa command for the remarkable feat of generating N87.8 billion in one month and hoped that by December, they would hit 150 billion.

“It is doable, the CAC of Apapa, Comptroller Malanta Yusuf did not achieve this by himself, but with the contribution of officers in his command. They should keep the flag flying and not let the figure go down,” she said.

She emphasised the need for proper port examination and commended them for the seizures they made.

“If there was no proper examination like the container that was seized with drugs, it would have been disastrous if it had entered the society,” she said.

Aremu advised the area controllers to do on the job training for officers, especially the younger ones coming into the job.

Aremu assured the officers that the Comptroller General of Customs was concerned about the welfare of officers.

Read Also:  Customs Awards Contract For Construction Of 132 Block Of Flats For Officers

She said that was why he sent the Deputy Controller General to Lagos to look for where to get land for a hospital of about 50 beds for the Nigeria Customs Service (NCS).

Aremu said that contracts had also been awarded for building 132 two-bedroom flats for Customs officers, to give them befitting apartments.

The ACG urged officers to come out and testify in court on cases they had as it was not enough to make seizures, but people needed to be prosecuted to serve as deterrent to others.

Comptroller Malanta Yusuf of the Apapa command said that there was synergy between them and other government agencies working in the port.

Yusuf said the synergy made it difficult for smugglers to penetrate at the port.