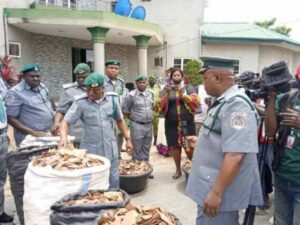 The Coordinator of the Force, Deputy Comptroller of Customs, Mr Faith Ojeifo, who displayed the items to journalists in Kaduna, said that the items were seized from smugglers within the North Eastern and North Western parts of the country.

“The seizure is particularly significant when we consider the implications of these goods landing in the wrong hands.

“In Nigeria, the importation of fertilizers is highly regulated. Without an End-User Certificate, it cannot be allowed to enter the market,’’ Ojeifo said.

Ojeifor further stated that the service also impounded seven units of vehicles with a DPV of N57,960,000.00 on suspicion of import irregularities.

He noted that the items are still under investigation to unearth the facts around their importation.

He reiterates that as part of the service commitment to duty, they have been collaborating with other security agencies within the region with a view to sharing intelligence.

“Even in a hostile security environment, we have managed to create a system that is withstanding the onslaught of smugglers,” he said.

He encouraged traders to avail themselves of the assets of the Service, to carry out their legitimate businesses.