· Officers not pursuing smugglers, went to get food - Customs

A mob in Jibia town, Katsina State, on Monday burnt a patrol vehicle belonging to the Nigeria Customs Service after it veered off road and killed seven persons, including a 13-year-old girl. 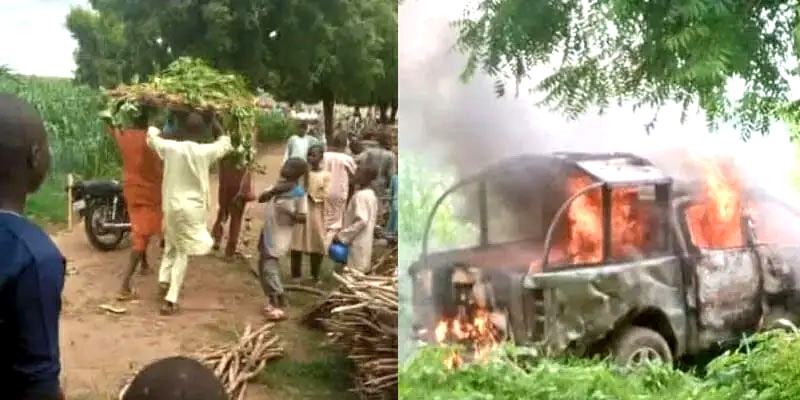 No fewer than 19 persons were also said to have also sustained varying degrees of injury and were rushed to the General Amadi Rimi Orthopaedic hospital, Katsina, for treatment.

Residents said the accident occurred on Monday around 10am when the NCS officers inside the patrol vehicle were chasing a Peugeot J5 bus suspected to be conveying contraband items.

The two vehicles were reportedly speeding and were approaching Jibia town through Kaoran-Namoda highway when the accident happened.

The residents added that the victims were standing by the road side, waiting for vehicles to convey them to their farms.

A resident, who did not want to be identified, said, “The driver of the patrol vehicle veered off the highway and ran over the people.

“Six people died on the spot while one died while being rushed to the General Amadi Orthopaedic Hospital. The remaining 19 who sustained injuries are presently on admission at the same hospital.”

The angry mob was said to have descended on the patrol vehicle and burnt it down before the arrival of security operatives.

The customs men were said to have escaped the mob.

The acting Controller of NCS in the state Dalha Wada-Chedi, , confirmed the incident in Katsina.

He however explained that the incident occurred when some operatives of the Border Drill went to Jibia to get food; “but unfortunately lost control and crushed some people to death.

“It is really unfortunate. We had to use our cordial relationship with the communities, the police, military and other sister security organizations to bring the situation under control.

“From the report we received so far, five people died and others are receiving treatment in the hospital.

“Those of our men involved are currently with the police and investigation is already ongoing to unravel the circumstances behind the incident,” he said.