An intense debate has erupted following the recent deployment of a Danish frigate on an anti-piracy patrol in Gulf of Guinea, which resulted in the death of four pirates and the capture of another four. 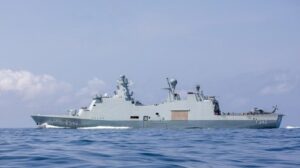 West African defense analysts view the incident as a defining moment in the evolving maritime security situation in the Gulf of Guinea. This is the first time a foreign navy has resorted to lethal force in dealing with pirates in the region.

The operation happened 25 to 30 nautical miles south of Nigeria’s territorial boundary. Several international shipping associations have lauded the Danes’ response to a potential piracy activity; however, the action received a mixed reaction within some West African nations.

Dr. Ifesinachi Okafar-Yarwood, a leading maritime security expert in the Gulf of Guinea, questions whether the Danish intervention may influence the nature of piracy attacks in future. “Could this see the increase in violence, as was the case in Somalia, which will justify a push for a Somalia styled response?” asks Dr. Okafor.

Amidst the debate over the role of international navies in anti-piracy operations, the region’s local governments must agree to face some realities, which may impede their efforts to stabilize the region.

Days before the Danish incidence happened, Amb. Florentina Ukonga, the Executive Secretary of the Angola-based Gulf of Guinea Commission (GGC), lamented that her organization consistently experienced lack of political commitment from leaders of the member countries. Amb. Ukonga was addressing participants in a virtual seminar held late last month as a prelude to Lagos International Maritime Week 2021.

Among other challenges, she noted the conflicting laws on security and safety at sea in the GGC countries.

“For instance, some countries do not have piracy laws; when pirates are caught, they are brought to the shores and let-off. But we do not want that to happen again. Nigeria has gotten an Act, the Suppression of Piracy Act of 2019, and we are proposing a code of conduct which should bind criminals when caught,” said Amb. Ukonga.

Dr. Dakuku Peterside, the immediate former Director of Nigerian Maritime Administration and Safety Agency (NIMASA), is another Gulf of Guinea maritime expert who has been pressing for a local solution to the region’s insecurity.

In March, a week after Denmark resolved to send a frigate to patrol the Gulf of Guinea, Dakuku penned an emotional letter in Nigeria’s Premium Newspaper saying that continued governance dysfunction in the Gulf of Guinea would have far-reaching implications to the status, stature and sovereignty of West African nations. According to Dr.Dakuku, this would be most pronounced for Nigeria, the largest economy in the jurisdiction.

“When small countries like Denmark provide security to Gulf of Guinea, what does that say about Nigeria’s image as Africa’s economic giant?” asked Dr. Dakuku: Nigeria built a strong reputation as a regional power within West Africa in the recent past. But with the current spate of insecurity and piracy, this reputation is gradually fading away. It is the high time Nigeria worked collaboratively with sister nations around the Gulf of Guinea to provide adequate security for the maritime sector.”