The infamous cargo ship MV EVER GIVEN is now finally heading for its original destination of Rotterdam, Netherlands after spending 112 days in Egyptian waters since it blocked the Suez canal on March 23 and was impounded after being set free six days later. 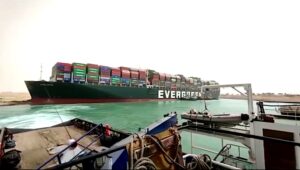 The ship departed the Egyptian city of Port Said, where it was docked for hull inspection and dive survey after it was released on July 7th from the Great bitter lake as the SCA and the shipowner struck an undisclosed settlement deal.

Reports suggest none of the cargo worth $780 million in the 18,300 containers onboard of MV EVER GIVEN belonging to various companies like Ikea, Lenovo, and smaller stakeholders like UK-bicycle maker, Pearson 1860 or Snugy vessel was part of the compensation deal. All the cargo that was stuck in limbo is set to be delivered to its original destination of Port of Rotterdam.

The all-Indian crew of 25 personnel of the MV EVER GIVEN was also relieved after being stuck maintaining the impounded vessel for four months. All the members were regularly in touch with their families for this duration and few were also allowed to leave earlier on the grounds of medical conditions.

The shipowner; Shoei Kisen Kaisha Ltd also praised the captain and the crew for their sincere efforts in refloating the vessel and maintaining it while it was in detention. New captain along with crew members also of Indian origin joined the ship before it departed from the Great bitter lake.

Several news agencies like CNN Business citing the statements of experts have suggested that cargo vessel, MV EVER GIVEN is expected to reach Rotterdam only after two weeks, more than the usual duration for the voyage due to the damages sustained during the grounding.