The Lagos State Waterways Authority (LASWA) has confirmed that two boats were gutted by fire in the Falomo area of Lagos on Wednesday, stating that two crew members were hospitalised following the incident. 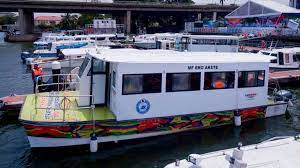 In a press statement by the Public Relations Officer of the Lagos State Waterways Authority (LASWA) Mrs. Nkechi Ajayi, she said a fire incident involving two LAGFERRY boats named Lateef Jakande, and Mobolaji Johnson occurred at about 2 pm on Wednesday 5th of January 2022.

She said preliminary investigation revealed that the fire began from a fuel tank of one of the boats, which later affected the other.

“Two crew members involved in the accident are now in the hospital after sustaining first-degree burns.

“A combined team of Lagos State Waterways Authority, Lagos Fire Service, Marine Police, and LAGFERRY Staff were able to curtail the inferno and recover the boat’s remains,” the statement said.

She explained that further investigation to explain the circumstances surrounding the incident are still ongoing at the time of this report.