FRSC Advocates Importation Of Only Vehicles With Speed Limit Device

The Federal Road Safety Corps, (FRSC) says it is working with relevant authorities to ensure that only vehicles installed with Speed Limit Device are allowed into the country. 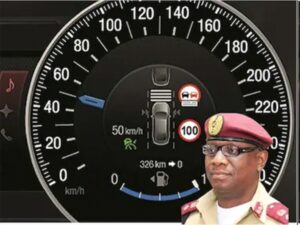 The Acting Corps Marshal, FRSC, Dauda Biu stated this while receiving the Leadership of National Union of Road Transport Workers, (NURTW) at the FRSC Headquarters in Abuja.

Biu said that the measure became necessary to remove additional cost burden on drivers for installation of the device.

The acting corps marshal emphasised the need for the two organisations to work together towards addressing incessant road accidents.

He said over 75 percent of the accidents were due to over speeding, drunk driving, use of phones and non compliance to use of seat belt.

According to him, the FRSC decided to introduce the Speed Limit Device as part of measures to check over speeding by motorists, particularly commercial drivers.

He appealed to the NURTW to caution members on creating additional seats in their vehicles which always resulted in overloading.

Biu also stressed the need for commercial drivers to avoid night journey, which he said, was always difficult for officers and men during emergencies.

Baruwa, however, solicited the assistance of FRSC on regular training and retraining for NURTW members.

“All the NURTW Executives have been directed to always ensure safety at motor parks and respect the rights of passengers at all times,” he said.