SEA TRIALS – A series of trials conducted by the builders during which the owner’s representatives on board act in a consulting and checking capacity to determine if the vessel has met the specifications. 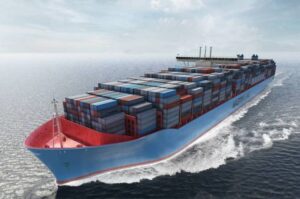 SEA WORTHINESS – The condition of the ship, based on the sufficiency of a vessel in terms of materials construction, equipment, crew and outfit for the trade in which it is employed. Any sort of disrepair to the vessel by which the cargo may suffer — overloading, untrained officers, etc., may constitute a vessel to be unseaworthy.

SEAWORTHINESS CERTIFICATE – A certificate issued by a classification society surveyor to allow a vessel to proceed after she has met with a mishap that may have affected its seaworthiness. It is frequently issued to enable a vessel to proceed, after temporary repairs have been effected, to another port where permanent repairs are then carried out.

SELF-GEARED SHIP – Any ship with its own gear, or crane/s for loading and discharging shipping cargo including containers, thus enabling the ship to serve ports which do not have suitable lifting equipment.

SELF-TRIMMING SHIP – A ship whose holds re shaped in such a way that the cargo
levels itself.

SEMISUBMERSIBLE – A ship able to submerge part of itself to load or discharge cargo that can be floated on or off. Usually semi-submersible ships are heavy-duty vessels.

SHIFTING – This refers to movements or changing positions of cargo from one place to another – a dangerous situation at sea that can easily endanger the seaworthiness or cargo worthiness of the
ship.

SHIP’S ARTICLES – A written agreement between the master of a ship and the crew concerning their employment. It includes rates of pay and capacity of each crewman, the date of commencement of the voyage and its duration.

SHIP’S STABILITY – The seaworthiness of a ship regarding the centrifugal force which enables her to remain upright.

SHIP’S AGENT – A person or firm who transact all the ship’s business in a port on behalf of shipowners or charterers.

SHIPPER – Individuals or businesses who tender goods or cargo for transportation – usually the cargo owners or their representatives and not to be confused with the party issuing the bills of lading or the ship’s operator who is the carrier..

SKEG – also spelt SKEGG. A projection similar to a keel at the stern of a vessel that offers protection to the rudder and propeller in the event of the vessel going aground in reverse.

SLOP TANK – A tank in a tanker into which slops are pumped. These represent a residue of the ship’s cargo of oil together with the water used to clean the cargo tanks. They are left to separate out in the slop tank.

STERN – The bow or rear of the ship; an upright post or bar of the bow of a vessel.

STERNWAY – The reverse movement of a vessel.

STORE – A general term for provisions, materials and supplies used aboard ship for the maintenance of the crew, and for the navigation, propulsion and upkeep of the vessel and its equipment.

STOWAGE – The placing of goods in a ship in such a way as to ensure the safety and stability of the ship not only on a sea or ocean passage but also while in port when parts of the cargo have been loaded or discharged.

STRANDING – The running of a ship on shore on a beach.

STUFFING (or STRIPPING) – the act of packing or unpacking a container.