German container shipping line Hapag-Lloyd has entered into an agreement with Italy-based Spinelli Group to acquire 49% in the Italian logistics group. 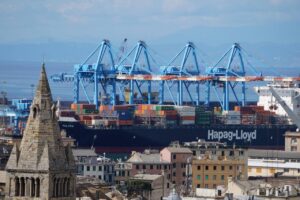 The minority stake will be acquired from existing shareholders, while Spinelli family will continue to hold the majority stake of 51%.

The financial details of the deal were not disclosed. The completion of the transaction is subject to the approval of the responsible antitrust authorities, which is expected within the coming months.

Genoa-headquartered Spinelli Group has been operating in Italy since 1963, offering services throughout the entire logistics chain of containers to the shipping lines including port terminal services, multimodal transport solutions, container depots and repairs, warehouses, and customs agent activities.

Read Also:  Privatization of Daewoo Shipbuilding is Priority for Korea

Hapag-Lloyd has used its pandemic profits to expand its service offerings, having recently completed its acquisition of the container liner business of German carrier Deutsche Afrika-Linien (DAL), further expanding its presence in the South African market. In 2021, Hapag-Lloyd acquired Africa-specialised carrier NileDutch, significantly strengthening its presence and service offering to and from West Africa

The German liner is also ordering new ships, upgrading its existing fleet with more fuel efficient technology, and equipping its entire fleet of dry containers with real-time tracking devices, making it the first major ocean carrier to do so.